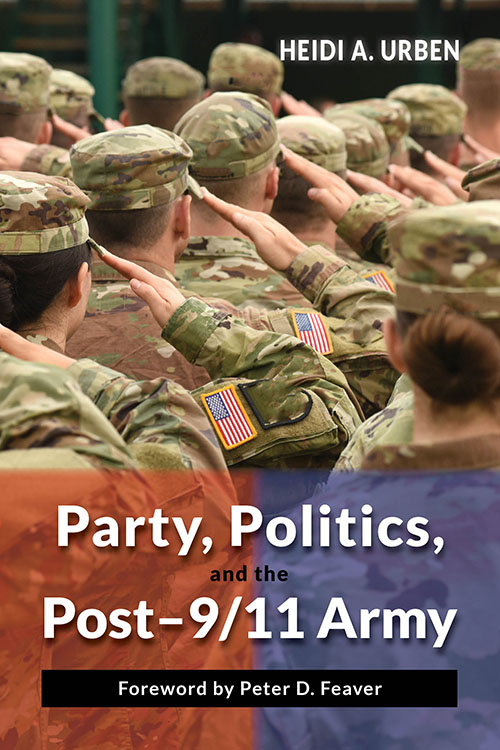 Party, Politics, and the Post-9/11 Army by Heidi A. Urben

“In my time as Chairman of the Joint Chiefs of Staff, I valued Heidi Urben’s wisdom, balance, and discipline in dealing with the most complex national security issues—and readers will appreciate those same traits being applied in this book, which I highly recommend.” —General Martin Dempsey, US Army (ret.), 18th Chairman of the Joint Chiefs of Staff, and 37th Chief of Staff of the Army

Throughout the existence of the All-Volunteer Force, but chiefly since the 1990s, the military has faced charges of growing politicization.During periods of heightened partisan polarization—and the inevitable civil-military relations turmoil that ensues—such charges tend to be asserted more frequently, even if the term and what it might constitute remains vague.

While civilian political leaders on both sides of the aisle arguably bear much of the responsibility for any politicization of the armed forces, this book examines the extent to which those in uniform may have contributed to its gradual politicization and the erosion of the military’s nonpartisan ethic.

Drawing upon original survey research of active-duty US Army officers conducted at various junctures over the past decade, this book explores the partisan and political attitudes of the officer corps. It examines the types of political activities officers engage in—including their expressed opinions on politics on social media—and whether such activities are in keeping with the norm of nonpartisanship and Department of Defense directives that govern political behavior. This data-rich volume includes more than 40 tables presenting helpful snapshots of information.

The book also explores how active-duty officers view politically outspoken retired flag officers, including whether the norm of nonpartisanship should extend into retirement. In addition, the book examines critical issues such as the impact of partisan political attitudes of officers on their views of civil-military relations, the roles senior military leaders and civilian policymakers should play during wartime, and the institution of the armed forces itself.

This book closes with recommendations for policymakers, along with an invaluable teaching resource for those in uniform today—a practical guide for how commanders can instill the nonpartisan ethic at the unit level, complete with recommended readings and proposed discussion questions. Given the scant attention paid to civil-military relations in formal professional military education settings, this guide is a helpful and valuable reminder that norms in any institution are only maintained through careful, continuous teaching and reinforcement.

Party, Politics, and the Post-9/11 Army is an important resource for military professionals and scholars and practitioners of civil-military relations, including senior military leaders and defense department officials. This book will be especially valuable for students enrolled in professional military education, particularly those attending senior service colleges, as well as students (both military and civilian) taking undergraduate- and graduate-level courses in national security studies.

“The relationships among our military, fellow citizens, and those elected to serve in public office are changing. However, few seem to appreciate the implications of such changes, even though civil-military relations are at the very heart of our democracy. This book addresses these issues with timely, important insights and refreshingly pragmatic advice. In my time as Chairman of the Joint Chiefs of Staff, I valued Dr. Heidi Urben’s wisdom, balance, and discipline in dealing with the most complex national security issues—and readers will appreciate those same traits being applied in this book, which I highly recommend.” —General Martin Dempsey, US Army (ret.), 18th Chairman of the Joint Chiefs of Staff, and 37th Chief of Staff of the Army

“While lots of us talk about what the military thinks, Professor Urben brings the data on Army officers. If this book just presented that it’d be an important addition to civil-military scholarship. But her analysis and practical appendix for use by Army leaders to instill the nonpartisan ethic in their units will help civilians better understand our military, and help our military better serve our country.” —Dr. Kori Schake, Director of Foreign and Defense Policy, American Enterprise Institute

“This book provides a particularly valuable window into the political beliefs and behavior of active duty (primarily US Army) officers. The idea that leaders of tactical units (battalions, brigades, and other service equivalents) should bear responsibility for the inculcation of nonpartisanship and healthy civil-military norms is novel and even somewhat provocative, but it flows logically from the author’s arguments. This focus and the book’s accessible length make it likely to become a required touchstone. This book is highly relevant to policy makers, with particular strengths that include its clear presentation of contemporary data on the political beliefs and behaviors of active-duty cadets and officers, its discussion of new dynamics created by social media, its large number of questions for future research, its pragmatic policy recommendations, and its guide for O5 and O6 commanders to use in teaching their units about the nonpartisan ethic.” — Dr. Suzanne C. Nielsen, coeditor of American Civil-Military Relations: The Soldier and the State in a New Era

“This book is a highly useful reference that could be used readily by professors of civil-military relations. It uses a range of survey tools to glean insights into changing norms within the US military. The breadth and depth of data is highly compelling and rigorous. Dr. Heidi Urben does a superb job laying out her argument clearly and logically. Each chapter is written in a manner that is easy to follow and, importantly, successfully ties in the implications that can be drawn from the statistics. Readers will find themselves carefully reading the conclusions at the end of each chapter and gaining new, important insights. This book offers significant findings to be pulled that will improve the dialogue within professional military education as well as senior military leaders' writings to their colleagues and guidance to the forces.” —Major General William E. Rapp, US Army (ret.), Lecturer in Military Affairs, Belfer Center, Harvard Kennedy School

Heidi A. Urben is a Chamberlain Teaching Fellow at Howard University, an adjunct associate professor in Georgetown University’s Security Studies Program, and a retired U.S. Army colonel. She writes on US civil-military relations and also serves as a senior associate (non-resident) at the Center for Strategic and International Studies, an adjunct scholar at West Point’s Modern War Institute, and a visiting Research Fellow at the Institute for National Strategic Studies at the National Defense University. She holds a PhD, MA, and MPM from Georgetown University, an MS from the National War College, and a BA from the University of Notre Dame.

Chapter 2. Party and Ideology: Continuity and Change in the Officer Corps

Chapter 3. Acts of Citizenship or Partisanship? Political Activity in the Officer Corps

Chapter 4. The State of the Nonpartisan Ethic in the World of Social Media

Chapter 5. “Princes of the Church:” The Much-Debated Role of Retired Officers in Politics

Appendix A. A Guide to Instilling the Nonpartisan Ethic at the Unit Level

Appendix B. Civil Military Relations in a Time of War Survey (2009)