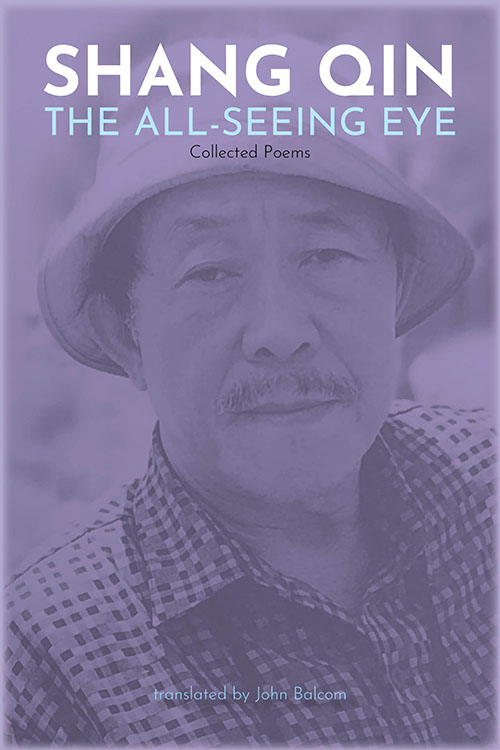 “This is a beautiful translation of the works of world-class poet Shang Qin, who was born in China and spent his entire adult life in Taiwan. His work speaks intimately yet powerfully to human suffering and dignity, alienation and empathy, darkness and hope. Once you have read Shang Qin’s poetry, you will want to reread it again and again!” —Michelle Yeh, UC Davis

Shang Qin (1930–2010) is widely considered one of the most influential and original modern Chinese poets. His critical acclaim was earned not only as a modern master of the prose poem but also as one of Taiwan’s leading surrealist poets.

Taiwan in the 1950s saw the beginnings of a broad, eclectic search for new poetic models and varieties of modernism. This gained momentum and progressed through the 1960s, growing into a modernist movement. During this boom period for poetry, some of the leading Chinese poets of the second half of the twentieth century and beyond emerged: Lo Fu, Ya Hsien, and Yang Mu, to name just a few. Shang Qin, also one of the giants of the movement, came to prominence during this period; his first collection of poetry Dream or Dawn, published in 1969, has been hailed as a landmark of Chinese surrealism. The poet Ya Hsien dedicated his poem “For a Surrealist” to Shang Qin, and the label stuck. Shang Qin always found the surrealist label too restrictive and once commented wryly: “I am not a surrealist; I am a super-realist or an uber-super-realist.” One of the hallmarks of his work was his preference for the prose poem, and his impact on the composition of modern Chinese prose poem is unquestionable. However, Shang Qin has noted: “I use prose poetry to create; I do not create prose poetry. The focus is the poem; it has nothing to do with prose.” Therefore, while critics and academics are inclined to categorize, Shang Qin has always resisted this, adamant about his creative independence.

Shang Qin published five collections of poetry: Dream or Dawn (1969), Dream or Dawn and Others (1988), Thinking with My Feet (1988), The Millennium Collection (2000), and Complete Poems (2009). The present volume, The All-Seeing Eye, is a complete translation of his 2000 volume, which includes poems from his first three collections as well a substantial selection of previously unpublished verse. This book is the largest selection of his poetry available in English.

“Shang Qin’s poetry is a fascinating blend of the mundane and the high modern, welding the prosaic with the intriguing twists of fantasy and difficulty. This is delivered in a language that matches the extremes in content. John Balcom has done a masterful job of bringing that out in these English translations. Like Shang, Balcom is willing to stay close to the hard ground, but when needed to take chances with soaring and daring language. A thoroughly intriguing read.” —Joseph R. Allen, University of Minnesota

“This is a beautiful translation of the works of world-class poet Shang Qin, who was born in China and spent his entire adult life in Taiwan. His work speaks intimately yet powerfully to human suffering and dignity, alienation and empathy, darkness and hope. Once you have read Shang Qin’s poetry, you will want to reread it again and again!” —Michelle Yeh, UC Davis

“To read the poetry of Shang Qin, an exile in Taiwan, is to dwell in the liminal space between dream and dawn. What begins deceptively as storytelling crystalizes into cosmic lyricism. Shang Qin is the most influential prose poet of his era and has exerted great influence on the mainland Chinese poets of the 1990s. The veteran translator John Balcom is one of the few up to the challenge of walking Shang Qin’s tightrope between narrative and lyric, between tactile and redolent natural imagery and the unconscious, and his renderings are a scintillating success.” —Christopher Lupke, University of Alberta

"The late Taiwanese poet Shang Qin’s poetic world is the purest surrealism; it’s a world infused with dreams, fantasy, and odd juxtapositions, often seemingly controlled by the workings of the unconscious mind....John Balcom’s translation of The All-Seeing Eye is brilliantly sensitive to the nuances of Shang Qin’s writing as it moves from the concrete world to that of the unconscious mind with all its extremes of language and flights of fancy. To quote André Breton once more, “The mind of the dreaming man is fully satisfied with whatever happens to it”; Balcom fully understands this, and his sympathetic translation makes reading Shang Qin’s poetry in English a moving and most enlightening experience." —Asian Review of Books

Shang Qin was born Luo Yan in Sichuan, China in 1930. At sixteen he joined the Nationalist Army and while in the southwestern part of China began collecting folksongs and writing poetry. He arrived in Taiwan with the army in 1950 and by the mid-50s was publishing and active in the Modernist Association, and later the Epoch Poetry Society. He retired from the military in 1968 and then went to attend the International Writers Program in Iowa, where he stayed for two years. Returning to Taiwan, he held various jobs such as working as a longshoreman and a gardener as well as selling beef noodles in Yonghe. Subsequently he worked as a newspaper editor. Hailed as a Surrealist and known as a master of the prose poem, he is generally considered one of the greatest poets of his generation. He passed away in Taipei in 2010.

John Balcom is Professor Emeritus at the Middlebury Institute of International Studies and an award-winning translator. Among his many translations are Abyss by Ya Hsien, My Village: Selected Poems 1972–2014 by Wu Sheng and Memories of Mount Qilai: The Education of a Young Poet by Yang Mu. Dr. Balcom is a past president of the American Literary Translators Association.

I / Dream or Dawn

Gradient of the Milky Way

A Tree among Trees

II / Dream or Dawn or Others

A Black Crystal without Substance

III / Thinking with Our Feet

The Speed of Sound

The First Seven Days after Her Death

The Thirty Five Days after His Death

Thinking with Our Feet

Sketches of the Five Organs

The Sunlight on the Backside of the Earth