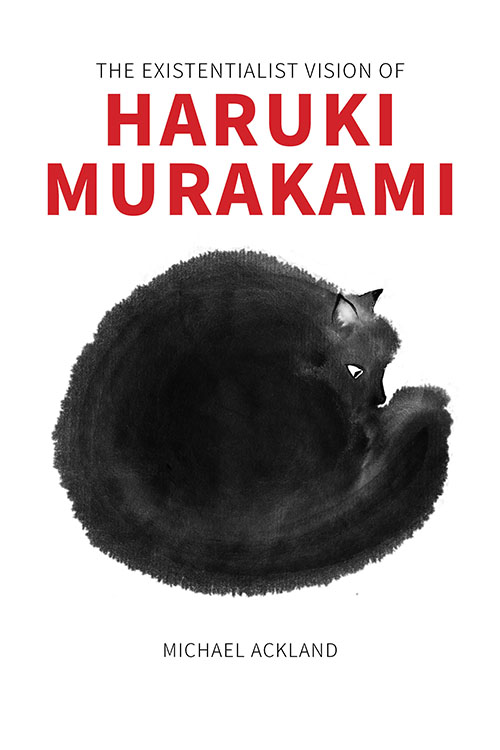 The Existentialist Vision of Haruki Murakami by Michael Ackland

"Well-written, engaging, and comprehensive ... Ackland explores Murakami’s work in its totality, paying attention to recurring themes and motives as well as favored metaphors and brings into relief a vision that penetrates Murakami’s kaleidoscopic literary space. This is a significant achievement, opening up room for new ways of reading Murakami, deciphering the key themes that constitute his fictional world and shedding light on the underpinning problem of consciousness that runs through Murakami’s oeuvre. ... A must-read for anyone wanting to further their understanding of Murakami’s literary world." —Toshiko Ellis, University of Tokyo

Haruki Murakami has often been accused of being a feckless, merely popular writer, but in this study Michael Ackland demonstrates that this is not the case, arguing that Murakami has not only assimilated the existentialist heritage but innovatively changed and revitalized it, thereby placing exciting personal possibilities within the reach of his worldwide readership.

Ackland’s study begins by tracing the troubled introduction of such alien conceptions as individualism, democracy and citizens’ rights, and self-interested autonomy into Japan. It argues that Haruki Murakami was seminally exposed to these ideas, and to their modern reconfiguration in French existentialism, during the student protests of the late 1960s, and that the dissent and radicalism of this period has been rechanneled into his fiction.

The first two chapters introduce readers to this formative period and to major, recurring concerns in Murakami’s fiction. Then modern existentialism itself is discussed in terms of its philosophical roots in the writings of Jean-Paul Sartre and Albert Camus, and of its fictional dramatization in the works of such authors as Fyodor Dostoevsky and Franz Kafka, and finally as it was received in Japan. Usually foreign conceptions undergo considerable recasting in Japan to heighten their relevance and innovative potential. This, too, is a hallmark of Murakami’s adaptations, and part of his virulent critique of Japanese socialization and conformity, which is traced initially in such important short fiction as “The Elephant Vanishes” and “Sleep.”

The bulk of this monograph focuses on the place of existentialism in Murakami’s major novels. It argues that much-maligned “Murakami man” actually represents a carefully calculated case of failed or partial socialization, which leaves him ripe for unconventional personal developments, and eventually to become an exemplary existentialist figure. In Japan, according to Murakami, the individual typically becomes a regimented, exhaustively worked foot-soldier of contemporary capitalism, or archetypal salaryman, with the potential for terrible excesses underscored by telling allusions to war atrocities and the holocaust. Or the individual can become a free-thinking agent and vibrant alternative to the Japanese consensual norm. Independent decision-making and action are all important, for as Sartre famously stated, “human freedom precedes essence.” In other words, we make ourselves—how this is possible is explored in three chapters, which examine in succession Murakami’s vision of childhood and formative years, his use of the supernatural and metaphor to disrupt social norms and to radically expand the challenges confronting individuals, and his evolving conception of what constitutes meaningful, accessible existentialist action.

The Existentialist Vision of Haruki Murakami is an important resource not only for scholars and students of Japanese literature, comparative literature, and world literature but also for readers who would like to gain a deeper appreciation of Murakami’s literary world.

"This is a well-written, engaging, and comprehensive study of the literary world of Haruki Murakami. It explores the trajectory of Murakami’s existentialist fiction, elucidating, both theoretically and biographically, how Murakami came in contact with Western philosophical writing; how his encounters with Sartre, Camus, and Kafka in particular had a decisive impact on his own creative career; and how his existentialist vision underwent different stages as he engaged in a unique, life-long project to respond creatively and critically to the sociocultural environment of his time. This work convincingly demonstrates that Murakami’s fiction is not a mere product of popular culture intended for light reading—Michael Ackland explores Murakami’s work in its totality, paying attention to recurring themes and motives as well as favored metaphors and bringing into relief a vision that penetrates Murakami’s kaleidoscopic literary space. This is a significant achievement, opening up room for new ways of reading Murakami, deciphering the key themes that constitute his fictional world and shedding light on the underpinning problem of consciousness that runs through Murakami’s oeuvre. This study is also appealing in that it contains great explication-de-texte of Murakami’s major works. Ackland navigates the reader into the depths of Murakami’s literary space through the analysis of metaphors, recurring images, and evolving themes, introducing the relevant texts roughly in the chronological order of publication, and allows the reader to get a grasp of the key features of the respective stories/novels. Attention given to the images woven in a number of Murakami’s fiction (e.g., the deep, dark well, white-walled hospitals, the paranormal yokai) helps the reader to achieve a satisfactory understanding of how Murakami’s literary world develops and what constitutes the underlying current of his oeuvre. This book will attract the attention of scholars not only in modern and contemporary Japanese literature but also in literary studies in general. It highlights the question concerning the intertwining relationship between literature and society not simply on the surface level but on a deeper philosophical level and presents a strong argument on the potential power of literature. Needless to say, this will be a must-read for anyone wanting to further their understanding of Murakami’s literary world." —Toshiko Ellis, University of Tokyo

"This is a book which discusses Haruki Murakami’s works as contemporary Japanese adaptations of French existentialist world views and ethics. Through an analysis of a large variety of Murakami texts, Michael Ackland proves how fundamentally and consistently existentialist Murakami is in his works. Articulate and convincing, this thought-provoking study will make a good contribution to Murakami studies as well as to studies of contemporary Japanese literature and comparative literature, especially for English-speaking audiences. This is a good critical guidebook not only for researchers of Murakami's fiction but also for English-speaking general readers in helping us understand one of the basic ethical foundations of Murakami’s literature." —Eiji Sekine, Purdue University

Michael Ackland holds the Colin and Margaret Roderick Chair of English at James Cook University, Townsville, Australia, and is Executive Director of the Foundation for Australian Literary Studies. He holds a PhD from the Australian National University and a BA from Monash University. He has been Chair of Australian Studies at Tokyo University, a Visiting Scholar at Columbia University, and a Fulbright Fellow at Louisiana State University. He is a Fellow of the Australian Academy of the Humanities and a Senior Fellow of the Cairns Institute. His previous publications include The Penguin Book of Nineteenth Century Australian Literature (1993), That Shining Band: A Study of Australian Colonial Verse Tradition (1994), Henry Kendall: The Man and the Myths (1995), Damaged Men: The Precarious Lives of James McAuley and Harold Stewart (2001), and Henry Handel Richardson: A Life (2004), The Experimental Fiction of Murray Bail (2012), and Christina Stead and the Socialist Heritage (2016).

Chapter 4: “Murakami Man,” Eichmann, and the Ambiguities of Evil

Chapter 6: The Return of the Y?kai, or Restaging the Paranormal