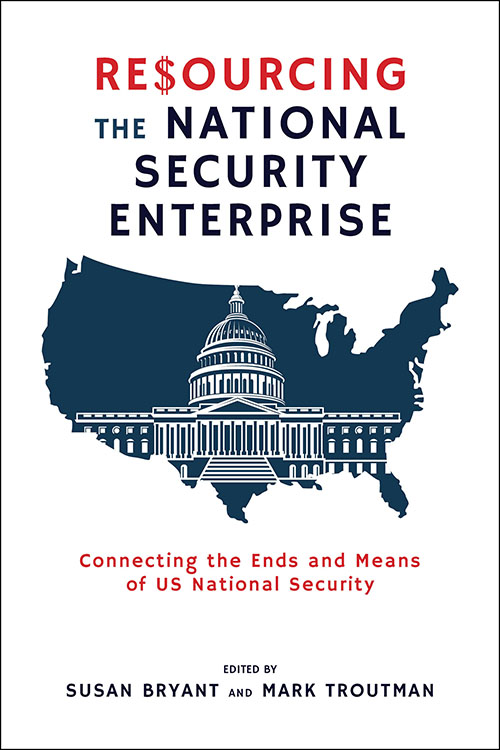 “This book is important because it explains how to resource national security. The hard bureaucratic work necessary to implement national security and defense policy is not glamorous, but it is essential. This collection of essays is unique in its clarity and comprehensiveness. Resourcing the National Security Enterprise is a must-read for practitioners and students in the areas of strategic studies and public policy." —Lieutenant General H.R. McMaster, US Army (ret.), 26th assistant to the president for National Security Affairs, and author of Battlegrounds: The Fight to Defend the Free World

Few military officers can ascend to the ranks of senior leadership without eventually being assigned to Washington, DC, where newcomers navigating the system inevitably become emmeshed, flabbergasted, and stymied by entrenched bureaucratic processes they had no idea existed. A career in diplomacy or working on the Hill often involves the process-oriented work necessary to keep departments funded and the government functional. In order to succeed, one must understand these rules, especially as they apply to resourcing. Without funding, strategies and policies are merely interesting ideas. Getting an idea or a program resourced requires a thorough understanding of the process.

Considering the national security enterprise from the standpoint of strategic resourcing is neither simple nor straightforward. To succeed requires a multidisciplinary approach; a team with substantial background knowledge on such diverse and byzantine topics as the Department of Defense acquisition system, the president’s budget submission, and the Federal Emergency Management Agency’s National Preparedness Frameworks, in addition to a basic understanding of macroeconomics. Further, the development of a cohesive and logical narrative is difficult because the Framers’ intended checks and balances among the executive and legislative branches effectively preclude the possibility of seamless integration among national security priorities. Anyone aspiring to have a career in national security must understand the process in order to be effective.

Graduate school programs in security studies, public policy, and political science offer multiple courses that consider bureaucracy from academic and theoretical perspectives, but these classes generally do not attempt to offer a practitioner’s view of surviving and thriving within the Washington bureaucracy. And although individual government departments and agencies such as the Department of Defense’s Joint Staff and the Department of State’s Foreign Service Institute (FSI) offer courses for personnel newly assigned to Washington, the majority of the learning occurs through on-the-job training.

This book fills the gap and provides a much-needed, theoretically grounded, and practical guide. Each chapter in this volume is by a practitioner with decades of experience working on resourcing issues in Washington. Their perspectives are informed by the cultures of the agencies in which they have worked and the positions they have held. Many currently teach in DC-based graduate degree programs in a variety of disciplines, including strategy, economics, and organizational leadership. Resourcing the National Security Enterprise will be a valuable resource for aspiring practitioners who are beginning or seeking careers in the American federal government and to those who wish to learn more about the inner workings of resourcing the national security enterprise.

“This book is important because it explains how to resource national security. The hard bureaucratic work necessary to implement national security and defense policy is not glamorous, but it is essential. This collection of essays is unique in its clarity and comprehensiveness. Resourcing the National Security Enterprise is a must-read for practitioners and students in the areas of strategic studies and public policy." —Lieutenant General H.R. McMaster, US Army (ret.), 26th assistant to the president for National Security Affairs, and author of Battlegrounds: The Fight to Defend the Free World

"As we consider the national security implications of competition with China and other major powers, Resourcing the National Security Enterprise uniquely fills a gap in the basic education of national security practitioners. While budget and fiscal policy processes are chaotic, this volume mitigates the risk of mishaps, omissions, and inefficiencies the country can no longer afford in the current domestic and geopolitical environment. For its encouragement to consider national security-prosperity paradigm changes, its ah-ha insights regarding process, the innovative ideas that would create synergy inside and among institutions, and its deep dive into the what-for and how of defense resourcing, this book should be required reading for all those embarking on a career in national security." —Brigadier General Kim Field, US Army (ret.), Director For Strategy and Policy, US Special Operations Command

"Those charged with allocating always-limited resources among national security needs will find this a valuable introduction to the American process and its constitutional underpinnings. Even experienced hands will find new insights and be refreshed by the authors’ broad concept of security, a product of their study and service to our nation." —David Chu, former president, Institute for Defense Analyses, and former Under Secretary of Defense for Personnel and Readiness

Susan Bryant is the Executive Director of Strategic Education International. She is also an adjunct professor at Georgetown University, a visiting lecturer at Johns Hopkins and a visiting research fellow at National Defense University. Dr. Bryant is a retired army colonel whose overseas assignments include Afghanistan, Jerusalem, and South Korea. She holds a doctorate from Georgetown University as well as masters’ degrees from Yale University and the Marine Corps University. Her publications include Military Strategy in the 21st Century and Finding Ender: Exploring the Intersections of Creativity, Innovation and Talent Management in the United States Armed Forces.

Mark Troutman is an educator, consultant, and retired colonel. He is Chief Operating Officer of Strategic Education International and teaches business and national security economics at Georgetown University, Johns Hopkins University, University of Maryland, and George Mason University. Dr. Troutman is the former Director of the Center for Infrastructure Protection (George Mason) and former Dean of the Eisenhower School (National Defense University). His military career included assignments in Europe, the Middle East, Asia and the United States. A SAMS and US Army War College graduate, he also holds a PhD in Economics from George Mason University and a Master of Public Policy degree from Harvard University.

Heidi Demarest is a lieutenant colonel in the US Army and an associate professor of American politics at the United States Military Academy. She is the Deputy Head of the Department of Social Sciences and holds a PhD from Harvard University and a BS from West Point. She is the author of US Defense Budget Outcomes: Volatility and Predictability in Army Weapons Funding and coeditor of US National Security Reform: Reassessing the National Security Act of 1947.

John Ferrari is a Visiting Fellow at the American Enterprise Institute and retired from the US Army as a Major General after 32 years of service, of which over a dozen years were associated with defense resourcing. He served as the US Army’s top strategic resource as the Director of Program Analysis and Evaluation, in addition to time on the Joint Staff and at the Office of Management and Budget. Ferrari holds an MBA from the Wharton School and a BS in Computer Science from the United States Military Academy.

Jason Galui is Founder & CEO of 4 Liberty Consulting LLC, which collaborates at the nexus of business, government, and academia. He is a Professor of Practice at SMU Cox School of Business, a visiting ccholar at Texas A&M, a Professor of Practice at JSOU, USSOCOM, and an adjunct professor at William & Mary. During his US Army career, Galui served on the NSC staffs for Presidents Obama and Trump, on the Council of Economic Advisers, as Special Assistant to the 18th Chairman of the Joint Chiefs of Staff, as an assistant professor at West Point, and deployed to Iraq and Afghanistan.

Michael Linick is a Senior Defense and International Policy Researcher at RAND and an adjunct assistant professor in the Security Studies Program at Georgetown University. A retired US Army colonel, he holds master’s degrees from Georgetown University (national security), Catholic University (world politics), and the US Army War College (strategic studies). At RAND, his publications include The Evolution of US Military Policy from the Constitution to the Present, The US Department of Defense’s Planning Process: Components and Challenges, and the game Hedgemony: A Game of Strategic Choices.

Thomas L. McNaugher retired from the position of Senior Visiting Professor in the Security Studies Program of Georgetown University’s School of Foreign Service in June 2018 but continues to teach courses there on the defense budget and the American Civil War. He began teaching at Georgetown University in 2011 after long stints at the RAND Corporation and the Brookings Institution. Dr. McNaugher’s books include Arms and Oil: US Military Strategy and the Persian Gulf and New Weapons, Old Politics: America's Military Procurement Muddle.

Geoffrey Odlum is a retired US State Department Foreign Service Officer who served in diplomatic assignments throughout Europe and the Middle East and in Washington DC. He is a consultant on emerging technologies’ impacts on national security, a Senior Advisor with the DOD-funded technology accelerator FedTech, and President of the Board of Coalescion), a nonprofit foreign and security assistance implementer. Odlum holds a graduate degree in national security studies from the National War College.

Rebecca D. Patterson is a Professor of Practice and Associate Director of the Security Studies Program at Georgetown University. A retired US Army lieutenant colonel, Dr. Patterson has served as the Deputy Director in the Office of Peace Operations, Sanctions, and Counter Terrorism at the Department of State. She holds a PhD from The George Washington University and is a lifetime member of the Council on Foreign Relations. She is the author of The Challenge of Nation-Building: Implementing Effective Innovation in the US Army from World War II to the Iraq War.

Laura Junor Pulzone is the Director of the Institute for National Strategic Studies at the National Defense University. She holds a PhD in economics from George Mason University. Dr. Pulzone has written and testified on topics ranging from military readiness to civilian personnel policy. She has held various executive leadership titles including the Deputy Undersecretary of Defense for Personnel and Readiness.