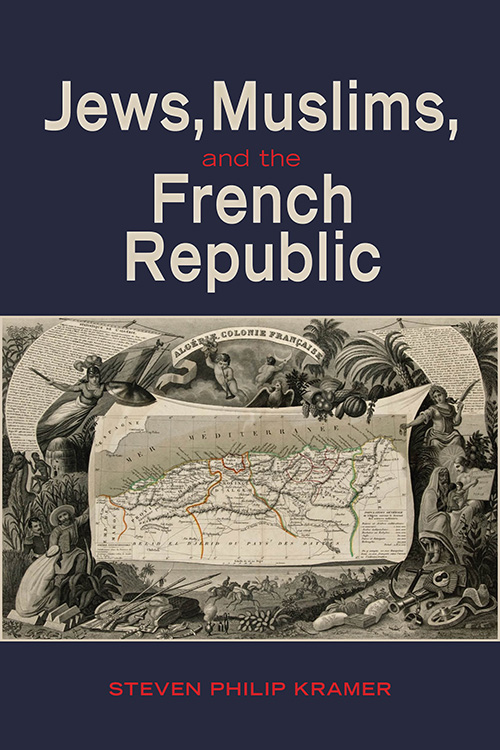 Jews, Muslims, and the French Republic by Steven Philip Kramer

"Steven Kramer embarked on writing this book after the 2015 Paris terrorist attacks; and with Jews, Muslims, and the French Republic, he offers for a non-French reader the best introduction to the complex relationship that has formed over time between Jews and Muslims in France. With an adequate balance between empathy and objectivity, this book shows convincingly how fear and prejudice fuel antagonistic narratives on each side—but, optimistically, it concludes on how to overcome these tensions. A must-read." —Nonna Mayer, CNRS Emerita Research Professor at the Centre for European Studies and Comparative Politics, Sciences Po, Paris

France was the first nation in Europe to proclaim the universal rights of man and to rein in the power of an established church, but nevertheless has had chronic problems with religious minorities. This book explores the complex, triangular relationship between the French Republic, Jews, and Muslims. It is the first book to compare the experience of French Jews and Muslims over the longue durée, tracing their experiences and interactions in both metropolitan France and the colonies under the evolving regime of laïcité. This historical and comparative approach does more than illuminate past and current tensions—it suggests how they may be resolved.

The French elections of 2022 witnessed efforts by the extreme right to focus its campaign not only on immigration and Islamic extremism but on the alleged incompatibility of Islam with French values. But if there is a “Muslim problem” in France today, that does not mean that French Muslims are necessarily its cause, any more than that Jews were responsible for the existence of a “Jewish Question” in nineteenth and early twentieth century Europe. If some French Muslims are not well integrated in French society and are ambivalent about their relationship to the Republic, much of the reason lies in long term historical and social factors. These factors cannot be dismissed as “mere history;” they continue to shape attitudes and behavior; historical memory must be reckoned with. The Jewish experience in France, particularly antisemitism, provides a template to understand the similarities and differences in the way France has treated Jews and Muslims. Historical examination also helps to explain tensions between French Jews and Muslims today.

Existing literature does not adequately address this triangular relationship. There are few books which compare the historical experience of French Jews and Muslims and none which do so for the entire period since the French Revolution. Likewise, what happened in metropolitan France and in the colonies is usually considered separately. Yet the roots of France’s problems with Jews and Muslims derive in large part from the colonial experience. This book situates contemporary problems of antisemitism, islamophobia, and Jewish-Muslim tensions in the broader context of French history and politics.

Jews, Muslims, and the French Republic will interest academics, students and a broader public concerned with France, Jews, Muslims, post-colonialism, political extremism, immigration, and religion in a secular society.

“A must-read for anyone interested in religion and secularism in France. With admirable objectivity and clear prose, Steven Kramer does a masterful job in analyzing Jewish and Muslim integration challenges in France in a historical and comparative framework. In a field dominated by polarizing and alarmist books on Islam and the future of Judaism in France, calmly analyzing both religions’ peculiarly French journey is of the many qualities of Kramer’s work. Be prepared to discover fascinating similarities and meaningful differences.” —Omer Taspinar, Professor, National Security Strategy, National War College

"Steven Kramer embarked on writing this book after the 2015 Paris terrorist attacks; and with Jews, Muslims, and the French Republic, he offers for a non-French reader the best introduction to the complex relationship that has formed over time between Jews and Muslims in France. With an adequate balance between empathy and objectivity, this book shows convincingly how fear and prejudice fuel antagonistic narratives on each side—but, optimistically, it concludes on how to overcome these tensions. A must-read." —Nonna Mayer, CNRS Emerita Research Professor at the Centre for European Studies and Comparative Politics, Sciences Po, Paris

"The struggle to integrate ethnic and religious minorities is a challenge that confronts almost every modern society. This well-researched book explores how France's resentment toward Jews and contempt for Muslims have plagued its history since Napoleon's days, tracing the origins to the country's colonial past. Jews, Muslims, and the French Republic offers important insights into how other nations, including the United States, can learn from France's myriad difficulties in achieving ‘liberty, equality, and fraternity’ for all its citizens." —William Drozdiak, The Last President of Europe: Emmanuel Macron's Race to Revive France and Save the World

"How does minority status impact the collective well-being and social options for people who are defined as minority? Jews and Muslims share that ambiguous fate in modern French history, yet no one before Steven Kramer has charted the parallel significance of their perilous journeys. This incisive, brilliantly crafted book is critical not just for the minorities concerned but also for all interested in the role of France in contemporary European history." —Bruce B Lawrence, Marcus Family Humanities Professor of Religion Emeritus, Duke University

Steven Philip Kramer is a Global Fellow at the Woodrow Wilson Center for International Scholars. He was Professor of History at National Defense University for thirty years. Kramer received a PhD from Princeton University and a BA from Brandeis University. His books include The Other Population Crisis: What Governments can do about Falling Birth Rates and Does France Still Count? He has published in such journals as Foreign Affairs, Politique Etrangère, and The National Interest. Dr. Kramer is a member of the Council on Foreign Relations.

Part I. The Weight of History

Chapter 1. How Napoleon Defined the French Jewish Community…but not the Muslim Community

Chapter 2. The Impact of Colonialism and Decolonization

Part II. A Republic of Ambivalence

Chapter 3. The Legacy of Betrayal

Chapter 4. The Dilemma of French Muslims

Chapter 5. French Jews and Muslims: More than Kin and less than Kind?