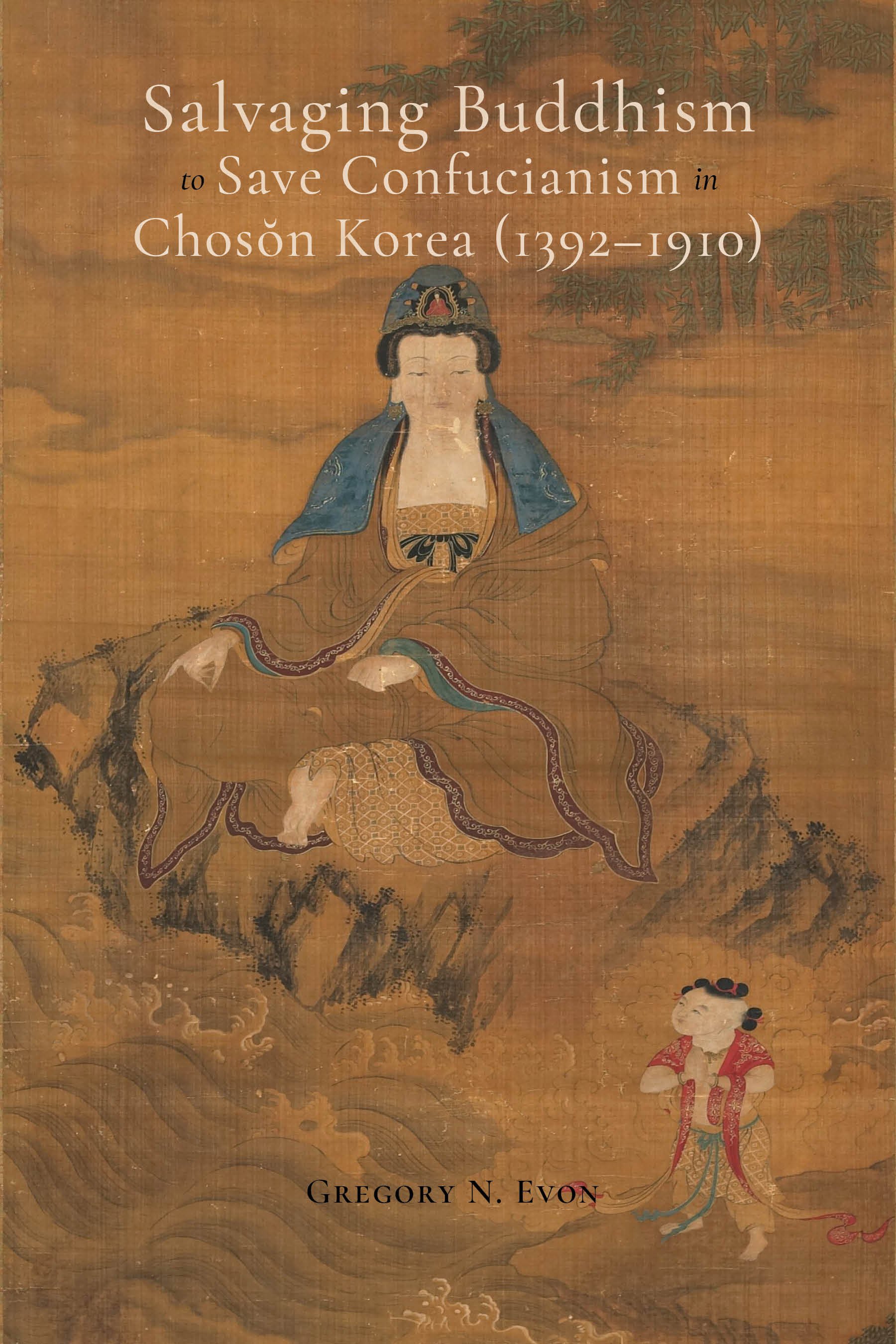 Salvaging Buddhism to Save Confucianism in Choson Korea (1392–1910) by Gregory N. Evon

"Seamlessly organized and smoothly presented with rich stories substantiated with exhaustive primary sources, Salvaging Buddhism is beautifully written and deeply engages in current scholarship through a critical analysis of texts. There is no comparable book on this topic in English; this book will become the authoritative history of Choson-era Buddhism.” –Hwansoo Ilmee Kim, Yale University

This book is in the Cambria Sinophone World Series, headed by Victor H. Mair (University of Pennsylvania).

Buddhism shaped the development of Korea after its introduction in the fourth century. It influenced culture, politics, and intellectual life, and it was seen as a complement to Confucianism and a support for the state. The result was a close alliance between secular rulers and the Buddhist institution. But with the founding of the Choson dynasty (1392–1910), Buddhism came under sustained attack as a threat to Confucian civilization.

Using a variety of primary sources, this book examines Choson (1392–1910) Korea’s anti-Buddhist movement as well as its failure. It shows how early anti-Buddhist policies that aimed to safeguard Confucian civilization led to conflict and increasingly harsh measures that culminated in the removal of legal recognition for Buddhism in 1566. The efforts to eradicate Buddhism failed in practical terms, but they succeeded in shaping the male elite to see Buddhism as incompatible with Confucian civilization. This idea became fundamental to the dominant ethos of educated men and their view of the Choson dynasty’s uniqueness in relation to China, Japan, and earlier Korean states.

Most studies of Korean Buddhism have focused on earlier eras and major figures in the formation of Buddhist thought. Sustained research into Choson Buddhism developed late and has emphasized the Buddhist resurgence that occurred over the second half of the dynasty. Little attention has been given to the severity of the anti-Buddhist program, the logic and policies that guided it, and its failure. This book examines the attempts to eradicate Buddhism and Confucian arguments that insisted Buddhist influence threatened the state and well-being of its people. The book shows how the Confucian ascendancy collapsed into dysfunction at the court of King Sukchong (r. 1674–1720), prompting Kim Manjung (1637–1692) to challenge the anti-Buddhist views that predominated among men of his class. Shortly before his death, he wrote a novel Lady Sa’s Journey to the South (Sassi namjong-gi). Drawing on the events at court and a collection Qing (1644–1912) Chinese Buddhist writings salvaged after a shipwreck, he argued that Buddhist faith was necessary to support Confucian moral values. No other book offers this kind of analysis of Choson Korea’s anti-Buddhist movement and its failure.

Salvaging Buddhism to Save Confucianism in Choson Korea (1392–1910) is a valuable resource for academic researchers, students, and general readers interested in Korean and East Asian Buddhism, history, and literature.

"This is the first and long-overdue book-length work in English on the history of Choson Buddhism. Salvaging Buddhism will undoubtedly prompt scholars to think of Choson Buddhism in a much more critical, comprehensive, and nuanced way. The uniqueness of the study lies in the way Gregory Evon tackles the questions surrounding Choson-era Buddhism. Evon reasserts the centrality of Neo-Confucian persecution, which scholars have recently been eager to jettison when describing the conditions of Choson Buddhism. He argues that the Neo-Confucian government did indeed try to wipe out Buddhism altogether and that the state persisted in its efforts throughout the Choson period. To prove this, Evon draws on three bodies of evidence: state anti-Buddhist policies; debates among intellectuals about ghosts, spirits, and rituals; and a vernacular novel, Lady Sa’s Journey to the South. Seamlessly organized and smoothly presented with rich stories substantiated with exhaustive primary sources, Salvaging Buddhism is beautifully written and deeply engages in current scholarship through a critical analysis of texts. There is no comparable book on this topic in English; this book will become the authoritative history of Choson-era Buddhism.” –Hwansoo Ilmee Kim, Yale University

"Tracing the tensions between Confucianism and Buddhism in Choson Korea, this provocative volume contains a bold interpretation of the writings of the Choson official Kim Manjung that is grounded in the author’s own discovery of the connection between the exiled Confucian official and a shipwreck carrying forbidden Buddhist artifacts that washed up on Korea’s shores in the seventeenth-century. Evon’s innovative reading of Kim Manjung’s work contextualizes it in the anti-Buddhist movement and Confucian preoccupations of the Choson male elite, and Evon illuminates the possibility that Kim’s reevaluation of Buddhism led him to write a Buddhist-Confucian novel for elite women who suffered under the impossible, patriarchal commitments of the Confucian tradition that the Choson dynasty was famously and exclusively committed to. Salvaging Buddhism’s unique methodological approach enables a nuanced study of how real, historical people chose and understood their religious commitments in times of intense change, and this makes it essential reading for scholars of Buddhism in particular and religion in general." –Stephanie Balkwill, UCLA

Gregory Evon’s Salvaging Buddhism combines extensive research of the historical record with keen literary analysis to argue that Kim Manjung’s late seventeenth-century novel, Lady Sa’s Journey to the South, should be read as an effort to convince his contemporaries that Buddhist faith was ultimately beneficial rather than injurious to Confucian moral virtues. Evon meticulously traces the attacks on Buddhism by the Confucian elites, and the anti-Buddhist arguments that accompanied them, in the first half of the Choson dynasty, before turning to the historical circumstances that surrounded Kim Manjung’s exile from the capital to a remote location on the southern coast of Korea. Along the way, Evon solves the puzzling centrality in Kim’s novel of the White-Robed Guanyin, a figure primarily known in Chinese Buddhism, and makes a strong case for interpreting the positive role of Buddhist faith in the story as a reflection of Kim’s symbiotic view of Buddhism and Confucianism. Salvaging Buddhism makes a valuable contribution to the scholarship on Buddhism in Korea under the Choson dynasty, but its richly nuanced and historically contextualized account of a literary creation by a famous Korean author will appeal to a wider audience.” —Mark Nathan, University at Buffalo

Gregory N. Evon is Senior Lecturer at UNSW Sydney. He holds a PhD from the Australian National University and an MA and a BA from Indiana University. Dr. Evon is coeditor of Premodern Korean Literary Prose: An Anthology. He has published in several books and journals, including The Journal of Asian Studies.

Chapter 4: Unseen Influences in Lady Sa’s Journey to the South

Chapter 5: The Buddhist-Confucian Symbiosis in Lady Sa’s Journey to the South