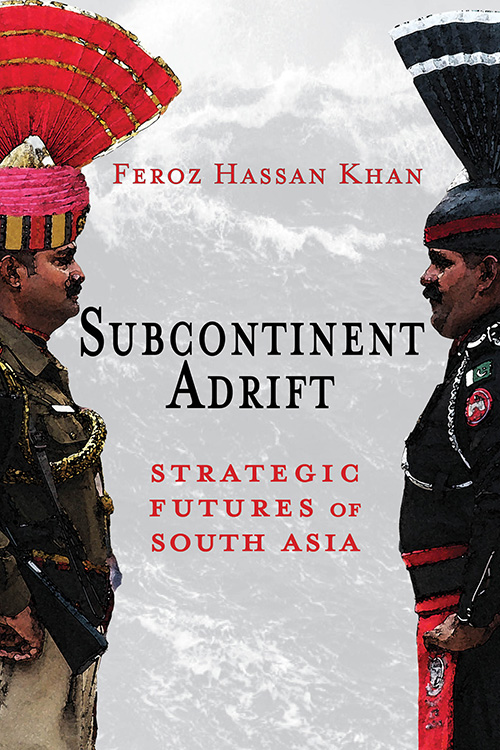 "An essential read for not only Pakistani officials involved in doing all this but also for academicians and citizens of India and Pakistan, for they are the victims of instability and beneficiaries of peace between the two South Asian titans." —Pakistan Politico

This book is in the Rapid Communications in Conflict and Security Series (General Editor: Dr. Geoffrey R.H. Burn).

While several books have examined the security challenges faced by India and Pakistan in isolation as well as the strategies they have each adopted in response, Subcontinent Adrift places the two sets of clashing outlooks, policies, and strategies together and analyzes the causes and consequences of the drift in South Asia. Subcontinent Adrift maps out and explains India and Pakistan’s respective interests, motivations, and long-term objectives from a contemporary perspective. Much has happened in the intervening period since the nuclear tests in 1998 that has shaped the rivalry between these two countries, including advances in their strategic capabilities, domestic political shifts, and changes in the global balance of power. Hence the book considers to what extent the “drifting” Subcontinent is affecting the political, military, and economic dynamics on the international stage and causing a “global drift”—described by Chester Crocker as a “disorderly mixture of turbulence and drift in relationships among the leading powers and key regional states.”

This study identifies the latent and emergent drivers behind the mounting acrimony in South Asia—notably, India’s ambitions as a “rising power” coupled with the resurgence of China and Pakistan’s strategic anxiety as the United States unmoors itself from Afghanistan and embraces India. India is similarly concerned as China advances its Belt and Road Initiative (BRI) across the region, developing a network of economic and strategic hubs and bringing India’s neighbors into China’s embrace through its strategy of peripheral diplomacy. Countries in the region are attracted by the new opportunities offered through the BRI, which in turn undercuts India’s national objectives and provides new incentives for Pakistan to balance against India. Khan elucidates the intricacies of such external drivers vis-à-vis the internal factors of both countries and their ramifications in various scenarios.

Subcontinent Adrift will be a valuable addition to the fields of international relations, security studies, and Asian studies.

"For those interested in South Asia and Pakistan, the book provides a unique understanding of the thinking in the security circles. Besides Pakistan, the author has conveyed a rare insight into Indian military thinking and Indian doctrinal stance. Feroz Khan is directly involved in some Indo-US interactions in the area. He informs the general reader about all that keeps the army commanders in the region awake at night. Pakistan and India have a growing appreciation of where the military establishments of the strategic enclave, as the author calls them, stand in terms of civil-military relationships. This book focuses on the strategic enclaves of these neighbors, specifically how their armies look at each other and determine their security doctrines. This perceptiveness makes it a valuable addition to the security literature on South Asia." —CISS Insight

"In order to identify future trends in South Asia through a rigorous assessment of Indo-Pak relations, it is critical to ask and answer this question: What stops New Delhi and Islamabad from taking tangible steps towards normalizing their relations and reaping the economic benefits of connectivity and integration? ... This book is a product of a two-decade-long research journey of the author, who was encouraged by Stephen Cohen to delve into the causes and consequences of the festering conflict between India and Pakistan. Here, it is noteworthy that, by virtue of dealing with India as a combatant, policymaker, and scholar, Khan is poised to look at the Indo-Pak conflict through many a prism. Additionally, his being associated with U.S. think tank and academic communities has given him an opportunity to add diverse perspectives and nuances to his research. ... an essential read for not only Pakistani officials involved in doing all this but also for academicians and citizens of India and Pakistan, for they are the victims of instability and beneficiaries of peace between the two South Asian titans." —Pakistan Politico

"Khan's thoughtful new book considers the causes and consequences of continuing tensions between the two countries and an impasse that has been so difficult to overcome. It seeks to dissect their respective interests, motivations and long-term objectives from the current perspective of India’s ambitions as a ‘rising power’, China’s growing global clout and pursuit of the Belt and Road initiative and what the author discerns as Pakistan’s anxieties over closer US-India ties. The impact of regional complexities and global geopolitical rivalries on India-Pakistan dynamics are kept squarely in view throughout the book...Khan’s excellent book is a must read to understand the many dimensions of a complex and turbulent relationship." —Maleeha Lodhi, former Pakistani ambassador to the United States, United Kingdom, and United Nations, Arab News

"Subcontinent Adrift provides a comprehensive account of the India-Pakistan competition after 75 years of independence, three bloody wars, and numerous near-miss nuclear crises. Professor Feroz Hassan Khan, former Brigadier in the Pakistani Army and Director in Pakistan’s Strategic Plans Division, gives us a vivid account of the region's tragic history, the domestic and international roots of rivalry, a spiraling nuclear arms race, and the many failed bids for peace and normalization. He offers a compassionate and lucid analysis of South Asia’s past and present and valuable insights into South Asia’s possible futures, ranging from the reassuring to the outright terrifying.” —Peter Lavoy, former Senior Director for South Asia, National Security Council

“The Indo-Pakistani rivalry has receded in international consciousness in recent years—sometimes for good reason. But the underlying sources of instability persist. Feroz Khan’s sympathetic survey of this competition aptly highlights why the quest for a lasting peace cannot be neglected any longer.” —Ashley J. Tellis, Tata Chair for Strategic Affairs, Carnegie Endowment for International Peace

"On the heels of his masterly account of the growth of Pakistan as a nuclear weapons state, Eating Grass, Feroz Khan turns to explaining the strategic imbalance in South Asia that feeds the unending hostility between India and Pakistan. In this compact and compelling analysis, he illustrates the historical and militaristic thinking on both sides that feeds enmity while hobbling the ability of both countries to achieve internal and external peace and development. Khan’s cogent new book should be seen as a warning that armed conflict or use of terrorist proxies will not solve the problems facing the teeming millions in South Asia—they will only exacerbate them." —Shuja Nawaz, Distinguished Fellow, South Asia Center, Atlantic Council

“This is an important volume on the India-Pakistan rivalry by a veteran scholar-practitioner on South Asian security issues and comes as the two countries celebrate 75 years of independence. It takes a historical overview of their rivalry with a comprehensive discussion of the evolution of their military strategies, situating it in the domestic and international political contexts. Professor Feroz Khan brings decades of experience as a senior military officer and as a highly respected academic expert to give well-considered projections of various strategic futures. For scholars, policy professionals, and students, this book provides a rich and timely perspective on the subcontinental dyad.” —Sharad Joshi, Associate Professor, Middlebury Institute of International Studies at Monterey

"A must read from Feroz Khan on the continuing simmering security dangers in South Asia and their impact on the rest of the world. Khan lays out a sensible path toward a ‘good’ future but laments that a ‘bad’ or ‘ugly’ future is more likely given the breakdown in India-Pakistan relations." —Siegfried S. Hecker, Professor and Senior Fellow, CISAC and FSI, Stanford University

"It didn’t have to be this way—two nuclear armed neighbors constantly at each other’s throats, drifting from one crisis to another, barely speaking, locked in perpetual struggle. Yet India and Pakistan share so much in common, including shared history, geography, and culture. What happened? Feroz Khan captures the deeply tragic nature of India-Pakistan relations that lead them on such different paths, one a chaotic democracy on the road to becoming a global power, the other a society still struggling to find its place in the sun. This book explains how South Asia arrived at its current circumstances, and how a better future might be possible." —Zachary S. Davis, Senior Fellow, Center for Global Security Research, Lawrence Livermore National Laboratory; and Research Professor, Department of Defense Analysis, Naval Postgraduate School

Feroz Hassan Khan is Research Professor at the U.S. Naval Postgraduate School. A former Brigadier in the Pakistani Army, he served as Director of Arms Control and Disarmament Affairs in the Pakistan’s Strategic Plans Division, Joint Services Headquarters. Khan has represented Pakistan in several multilateral forums and has published on Pakistan’s security policies and strategic stability in South Asia, including Eating Grass: The Making of the Pakistani Bomb (Stanford University Press).