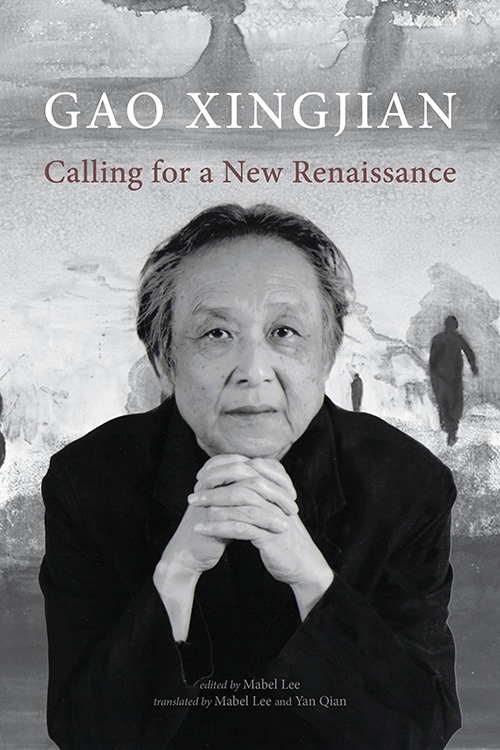 Calling for a New Renaissance by Gao Xingjian

"A tour de force! In this book, Nobel laureate Gao Xingjian addresses pressing issues about literature, ideology, politics, environment, and the human and inhuman conditions of the 20th and 21st centuries. Gao Xingjian’s thinking matters now more than ever as we live in a time wrought with uncertainties and threats resulting from ideological conflicts, technological changes, and environmental catastrophes." — Mingwei Song, Wellesley College

Includes 50 images, with a large number of paintings from Gao Xingjian's private collection.

Gao Xingjian won the Nobel Prize for Literature in 2000 for a body of literary works originally written and published in Chinese and later translated and published in English, French, and Swedish. Gao’s plays have been performed in even more languages on the stages of Asia, Europe, United States, Africa, and Australia. He is also recognized as a painter of international significance; in 2015 his six-panel work The Awakening of the Consciousness became the sole permanent display of a designated room in the Royal Museums of Fine Arts of Belgium. His extraordinary creative achievements draw on his innate talents but also on his profound knowledge and understanding of the creative arts of China and the West.

Born 1940 in China, Gao Xingjian graduated from the Foreign Languages Institute (now renamed Beijing Foreign Studies University) with a major in French and then lived through the horrors of the Cultural Revolution. He became a celebrity playwright and literary critic during the early 1980s until the Chinese authorities banned his works. In 1987 he traveled to Europe and by early 1988 settled in Paris, where he began to write and to paint. Today most of his major writings have been published in different languages and his plays continue to be staged all over the world. In addition, there have been ninety solo exhibitions of his Chinese ink paintings that have been held in Asia, Europe, and the United States, and some fifty books have been published on his art.

In Calling for a New Renaissance, Gao presents his primary concerns of the past decade or so. He indicts the lingering impact of ideology on contemporary literature and art, and for this reason calls for “a new Renaissance,” a result of which would be “boundary-crossing creations” such as the three cine-poems that he produced and describes in detail in this book. Of importance in this book, and not documented elsewhere, Gao offers his insights on how, despite receiving his education in the People’s Republic of China, he succeeded in educating himself in both Chinese and world literatures because of his love of reading and his disciplined approach to reading. This book also includes fifty images selected by Gao, forty-five of which are his favorite paintings from his private collection.

"A most valuable collection of writings and public statements by the Nobel laureate Gao Xingjian, whose independent voice calling for the supremacy of human creativity and the transcendental significance of art and literature deserves to be heard, especially in the present age of global crisis. Upon rereading these essays in this elegant English translation, I was deeply impressed by the clarity and clairvoyance of his vision that can be attained only after a lifetime’s dedication to the creative act across the entire range of transmedia genres." —Leo Ou-fan Lee, The Sin Wai Kin Professor Emeritus of Chinese Culture, The Chinese University of Hong Kong

"Gao Xingjian, a writer, artist, thinker, and traveler, is among the most inspiring minds of our time. In this new collection of essays, he explores the boundaries of the humanities, ponders the terms of boundary-crossing, and offers his own discoveries and insights on the other side of boundaries. A Renaissance man in his own right, Gao offers a compelling manifesto for the New Renaissance in the post-pandemic age." —David Der-wei Wang, Edward C. Henderson Professor of Chinese Literature, Harvard University

"This book is a tour de force! It introduces English-language readers to the profound thoughts of one of the world’s most distinguished writers. In this book, Nobel laureate Gao Xingjian addresses pressing issues about literature, ideology, politics, environment, and the human and inhuman conditions of the twentieth and twenty-first centuries. Gao’s thinking matters now more than ever as we live in a time wrought with uncertainties and threats resulting from ideological conflicts, technological changes, and environmental catastrophes. Gao’s thoughts on literature and politics, together with his artworks, as Jianmei Liu so eloquently states in her foreword, 'have exemplified a personal renaissance in literature and art in a time besieged by commercial desires, political struggles, and spiritual destitution,' and this new renaissance represents a third space that exists outside the dualist thinking and goes beyond the 'either/or' dichotomies, 'achieving a Zhuangzian state of absolute spiritual freedom.' Gao’s literature and art, in their unique way, have upheld the individuation of literary writing and artistic creation at a pivotal time of history when sweeping changes are taking over literary and artistic production, now oriented toward the digital, the cybernetic, and the virtual. This book also showcases Gao’s masterful expressions of artistic freedom through breathtaking visual images, in forty-five of Gao’s paintings selected by Gao himself. This collection is one of a kind, with the verbal and visual parts interwoven in a rich, synergistic manner." — Mingwei Song, Professor of Chinese, Wellesley College

"Gao Xingjian’s call for a new Renaissance is like the 'sudden enlightenment' in Zen Buddhism. The present state of art and literature, according to him, needs a sudden jolt of awakening. He sees the threats, the dangers, and the imminent disaster of the destruction of beauty and humanity due to commodification and politicization. Writers and artists seldom comment on their own work, but Gao is the exception. He enjoys talking about his novels, plays, films, paintings, and photography. This makes him more accessible to students and scholars hoping to understand this wonderful writer and artist. Thus, the value of this collection of essays by Gao and interviews with him. Gao’s voice deserves to be heard, and this book provides the channel to further understand the workings of the mind of a Nobel prize winner.” —Gilbert Fong, Dean and Professor, School of Translation and Foreign Languages, The Hang Seng University of Hong Kong

Gao Xingjian is the first China-born individual to be awarded the Nobel Prize for Literature. He is famous not only for his novels, including Soul Mountain and One Man’s Bible, which have been published in many languages, and his essay collections, including Gao Xingjian: Aesthetics and Creation, but also for his plays and operas which have been performed in various languages on five continents. Gao is also a talented painter, and there have been ninety solo exhibitions in Asia, Europe, and the United States held for his creations, and in 2015 his large six-panel artwork The Awakening of the Consciousness was made a permanent display at the Royal Museums of Fine Arts of Belgium. An innovative producer of transmedia creations, his cine-poems to date are Silhouette/ Shadow, After the Flood, and Requiem for Beauty.

About the Editor and Translator

Mabel Lee is an Honorary Fellow of the Australian Academy of the Humanities and concurrently Honorary Professor at The University of Sydney and the Hong Kong Metropolitan University. She is best known for her translations of Nobel Laureate Gao Xingjian’s writings, as well as her prolific writings on various aspects of his creative aesthetics. Her translations include Gao Xingjian’s novels Soul Mountain and One Man’s Bible, his short-story collection Buying a Fishing Rod for My Grandfather, and his essay collection Aesthetics and Creation. Her most recent publication is her coedited book Gao Xingjian and Transmedia Aesthetics.

Yan Qian teaches translation and interpreting at Macquarie University where for many years she convened the Advanced Master of Translation program. Her co-translated books in Chinese include Stephen Owen’s Late Tang Poetry and Frances Yates’ The Art of Memory, while her translations into English include Liu Zaifu’s “Gao Xingjian’s Notion of Freedom,” in Freedom and Fate in Gao Xingjian’s Writings. Her research essay “Lu Xun and Purposeful Translation” and her translation of Guo Jian’s “Lu Xun’s Demon-Exposing Mirrors were published in Lu Xun and Australia.

Chapter 2. Identity: The Scourge of Literature

Chapter 3. Walking Out of the Shadows of the Twentieth Century

Chapter 4. The End of an Era of Ideology; Non-Utilitarian Literature and Art

Chapter 6. Calling for a New Renaissance in Literature and Art

Chapter 9. After the Flood

Chapter 10. About Requiem for Beauty and Discussing Cine-Poetry

Chapter 11. Testimonial for the Staging of Of Mountains and Seas

Chapter 12. The Aesthetics of Creation

Chapter 13. Language Not Location Defines the Writer. An Interview with Noël Dutrait

Chapter 14. The Freedom to Learn, Understanding History, and a New Renaissance. An Interview with Chen Deng-wu

Chapter 15. Rationale for a New Renaissance. An Interview with Chantal Colleu-Dumond