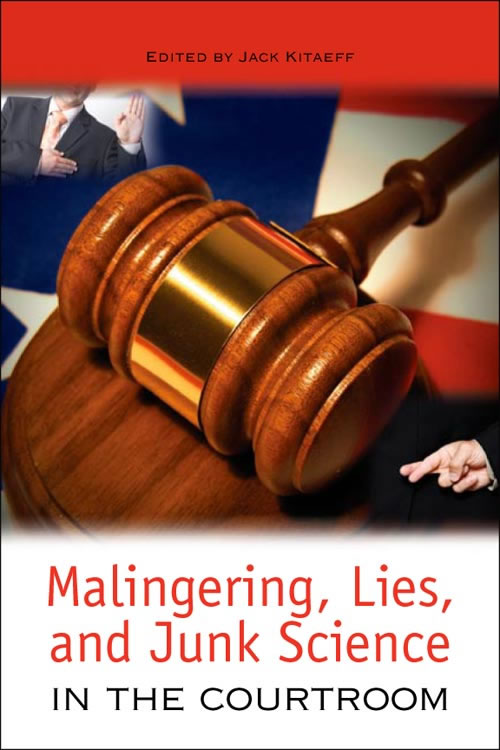 Malingering, Lies, and Junk Science in the Courtroom by Jack Kitaeff

This book will be of monumental use to practicing attorneys and law students, practicing psychologists and psychiatrists, and students in mental health and criminal justice.

Cited as a scholarly reference by the United States Supreme Court in the case of U.S. v. Graydon Earl Comstock, No.08-1224 (November 4, 2009), this book presents a scholarly examination of some of the most popular psychiatric disorders, psychological syndromes, trauma disorders, addictions, and emotional injury claims in an attempt to determine if these are merely forms of malingering being used to achieve financial gain through litigation, or as a means of escaping criminal or civil responsibility. The book also examines unreliable and unsubstantiated treatment and assessment methods used by the mental health industry which find their way into the courtroom.

There has been a significant amount of research (and anecdotal evidence) recently presented in the scientific literature regarding many of the above-mentioned topics. In addition, there is a seemingly neverending parade of legal cases in the media which are examples of some of the topics of this book (e.g., the Andrea Yates case and others).

What distinguishes this edited book from others is (1) it does not shy away from confronting the unusual and even bizarre psychological phenomena which the legal profession must deal with; (2) it provides a solid theoretical review from renown psychologists, psychiatrists, and lawyers; (3) it provides the latest psychological research findings relating to various questionable disorders and methods; (4) it presents real-life experiences from the courtroom; and (5) relevant case law is discussed.

This book will be of monumental use to practicing attorneys and law students, practicing psychologists and psychiatrists, and students in mental health and criminal justice. The book will allow for a clear understanding of “syndrome” evidence, its uses and abuses, malingering, phony and bogus “diseases” and “addictions,” and how patients, clients, and defendants (as well as psychiatrists, psychologists, and lawyers) abuse the mental health and legal systems in order to escape criminal culpability, attain benefits, or make a case.

This book received the significant honor of citation as a scholarly reference by the United States Supreme Court in the case of U.S. v. Graydon Earl Comstock, No.08-1224 (November 4, 2009).

Dr. Jack Kitaeff is a licensed clinical psychologist in Virginia specializing in forensic and police psychology.

Dr. Kitaeff has edited a book on Forensic Psychology and also written a book on Jewish people in Law Enforcement. He is an adjunct professor of psychology with the University of Maryland, and serves on the faculty of Capella University, Walden University, and the Washington Center as well. He has appeared on several television and radio programs.

Alan A. Abrams, MD, JD, FCLM is a psychiatrist and a lawyer whose practice includes providing expert testimony and evaluations in criminal, civil, disability, competency, and worker’s compensation cases.

Lee Bewley, PhD, MHA is a major in the U.S. Army, Medical Service Corps and an assistant professor in the Army-Baylor University Graduate Program in Health & Business Administration.

Robert W. Bigelow, JD is a managing partner in the law firm of Bigelow & Narra, LLC (NY, NJ). He is an author, educator, and frequent television commentator on legal issues. He is a former senior supervising attorney with the Legal Aid Society-Criminal Defense Division (LAS-CDD) in New York City.

Ariana M. Brooks, MA is a research assistant with the Berger Institute for Work, Family, and Children at Claremont McKenna College.

John S. Carbone, MD, JD, MBA serves as chief of psychiatry for the North Carolina Department of Corrections. A lawyer as well as a psychiatrist, he is also a fellow of the American College of Legal Medicine.

Karin Horwatt Cather, JD is a former assistant commonwealth attorney in Virginia. She is a writer with the National District Attorney’s Association and writes articles on technical topics for The Prosecutor magazine.

Diane F. Halpern, PhD is director of the Berger Institute for Work, Family, and Children, as well as a professor of psychology, at Claremont McKenna College. She is a past president of the American Psychological Association.

Alan Newman, MD is a psychiatrist in private practice.

Maheen Patel, MD is a psychiatrist in private practice.

Richard G. Salamone, PhD, ABPP is in the private practice of neuropsychology, clinical psychology, and biofeedback. He provides outpatient and inpatient neuropsychological assessments and consultations with neurologic and psychiatric populations, as well as psychological assessment of psychiatric and medical/surgical populations (including pre-surgical psychological evaluations). Dr. Salamone also provides psychotherapy with a broad range of adult patient populations including mood and anxiety disorders, personality disorders, psychotic disorders, and chronic pain. He is on the active medical staff of the Wellmont-Bristol Regional Medical Center.

Stanton E. Samenow, PhD is a clinical psychologist in Alexandria, Virginia, specializing in forensic psychology. He has served as an expert witness in criminal and civil matters. Among the books that he has written are Inside the Criminal Mind, and Before It’s Too Late: Why Some Kids Get Into Trouble and What Parents Can Do About It.

Antoinette Collarini Schlossberg, PhD is an associate professor of Criminal Justice in the School of Professional Studies at St. John’s University.

Harvey Schlossberg, PhD is an associate professor of Criminal Justice in the School of Professional Studies, St. John’s University. He is the author of Psychologist With a Gun.

Nesibe Soysal, MD is a psychiatrist in private practice.

Paul F. Stavis, JD was the founding director of the Law and Psychiatry Center at the George Mason University School of Law. He has been a professor of health, mental health, criminal, and bioethics law at various institutions of higher learning. He is an experienced litigator in large-scale civil rights class actions and in general private practice. He is currently the director of the Bureau of House Counsel for the NYS Department of Health. He has written extensively in many areas of law and psychiatry, including empirical studies of public policy, care, and treatment.

Clayton Stephenson is a graduate student at Claremont Graduate University.

Sandra R. Sylvester, JD has been an assistant commonwealth’s attorney in Prince William County, Virginia, since 1988. She has prosecuted child abuse cases for 17 years and lectures throughout the Commonwealth of Virginia on topics relating to prosecuting and investigating child abuse cases and dealing with expert witnesses. She started the “Expert Witness Database” and maintains information on common defenses and defense experts. Ms. Sylvester was the 2005 recipient of the Von Schuch Distinguished Assistant Commonwealth’s Attorney Award for her work in child abuse and her assistance to Virginia’s prosecutors.

Susan B. Trachman, MD is currently in private psychiatric practice in Fairfax, Virginia. She is an associate clinical professor of psychiatry at Georgetown University and George Washington University.


Chapter One: The Need for Critical Thinking in Forensic Psychology

Chapter Five: The Myth of the Successful Insanity Defense

Chapter Nine: Madness in the Supreme Court: Nullifying its own Rules of Scientific Evidence: The Phenomenon of Lack of Insight as a Corrective to Judicial Nullification in Civil Commitment Proceedings

Part Three: Lack of Insight as a Corrective

Chapter Eleven: ‘Into the Wonderland of Clairvoyance’: Faulty Science and the Prediction of Future Dangerousness

Chapter Twelve: Are Sexual Offenses the Result of an Addictive Pattern?