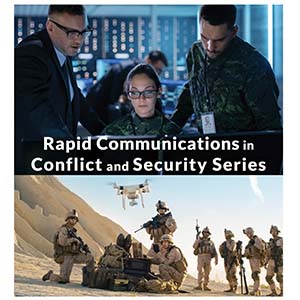 Utilizing its unique capability to combine speed of publication with high-production values, Cambria Press is proud to announce a new series, Rapid Communications in Conflict and Security (RCCS), to bring to market in a timely manner books on a range of pressing aspects of global and national conflict—from foreign policy and diplomacy to the projection of both inter-state and intra-state hard power.

The series is headed by general editor Dr. Geoffrey R. H. Burn, a former army officer with a doctorate in organization theory and strategy as well as thirty years of experience as the chief executive of book and journal publishing companies. He is a fellow of the Inter University Seminar on Armed Forces and Society, a member of the Association of Former Intelligence Officers, a member of the Royal Canadian Military Institute, and a fellow of the Royal Society for the Arts.

The RCCS series will provide policymakers, practitioners, analysts, and academics with in-depth analysis of fast-moving topics that require urgent yet informed debate. Wherever possible, arguments will be set within an appropriate theoretical and/or historical context—but all authors will ensure that their books have practical application. The series will accept arguments from all theoretical perspectives written by political scientists, sociologists, anthropologists, and historians—whether working in a university context, government, an NGO, or the military.