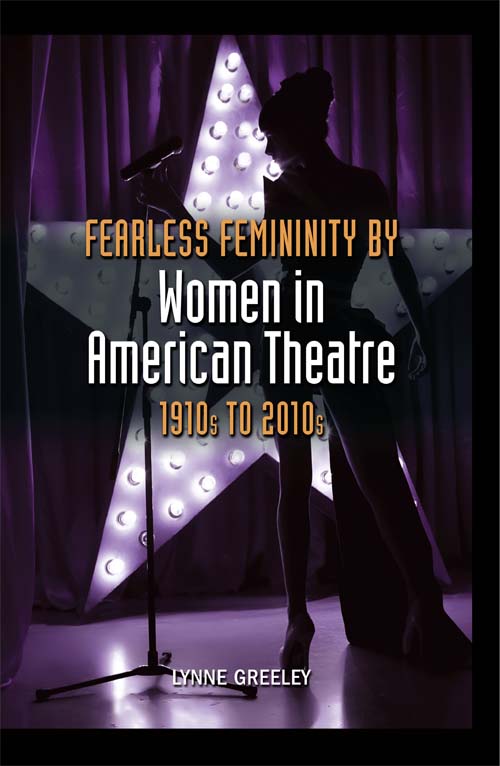 From the beginning of the twentieth century, when women were claiming the right to be in a public space while keeping their private reputations intact, to the beginning of the twenty-first century, when female artists claim and display their own bodies by choice, artists in American theatre have proved that the performance of the feminine no longer belongs to a mystique created by men but to the women who choose to be and do and sell as they please. All the artists in this study have been selected specifically for their subversions of traditional ideas of femininity. Some artists are well established in the critical literature and others are lesser known, but each has used her notion of femininity to empower a wider reach of feminism, even if indirectly.

Whether contemporary females, transgender, or queer people love, hate, or are indifferent to the idea of femininity, their cultural conditioning creates personal responses to it that are rarely neutral. What is new about this writing is the demonstration of the intimate relationship between femininity and feminism, a combination that has created a century of powerful—and not always feminine—feminists.

In this unprecedented, fascinating book which covers women in theatre from the 1910s to the 2010s, author Lynne Greeley notes that "feminism" (which, for the purposes of this study, is defined as the political impulse toward economic and social empowerment for females or the female-identified) is a position perceived by many feminists as oppositional to ideas of femininity that they see as personally and politically constraining. Moreover, "femininity" is perceived as comprising social behaviors and practices that mean as "many different things as there are women," some of which are empowering and others of which are not.

This book illuminates how throughout the twentieth century and into the twenty-first, playwrights and artists in American theatre both embodied and disrupted the feminine of their times. Through approaches as wide ranging as performing their own recipes, energizing silences, raging against war and rape, and inviting the public to inscribe their naked bodies, theatre artists have used performance as a site to insert themselves between the physicality of their female presence and the liminality of their disrupting the role of the feminine. Capturing that place of liminality, a neither-here-nor-there place that is often unsafe, where the established order is overturned by acts as banal as raising a plant, women have written and performed and disrupted their way through one hundred years of theatre history, even within the constraints of a variably rigid and usually unsympathetic social order. Creating a feminist femininity, they have reinscribed their place in the culture and provided models for their audiences to do the same.

Read the Interview with the Author.

"Greeley has assembled a very large ‘cast’ of female artists: their ranks include the ‘first feminists’ (p. 215) Megan Terry and Bobbi Ausubel; Martha Boesing, cofounder of the feminist Minneapolis theatre company, At the Foot of the Mountain; Spiderwoman Theater, the Indigenous all-female (and all family) company; and commercially successful representatives of ‘third-wave’ feminism, such as playwrights Eve Ensler, Rivka Solomon, and Sarah Ruhl. Greeley also discusses the work of playwrights and performers who challenge not just the masculinity of American theatre but confront its whiteness and hetero-normativity: Latina playwright Caridad Svich; African American playwright Lynn Nottage; and artists Adelina Anthony, Young Jean Lee, and Najla Said, who (respectively) work from the perspectives of Ch/Xicana, queer, Asian American,and Arab/Palestinian American theatre and performance. Greeley brings to her research a deep-rooted knowledge of both American theatre history and feminist work’s place within it. Throughout the book she stresses women’s choices, their agency and activism, in crafting female or female-identified characters, ones made in the face of an art form and profession that has historically been dominated by men. ... students of American theatre history, American women’s and gender history, and the histories of American feminism will have much to learn from Greeley’s own fearless approach to her subject.” —Women’s History Review

Lynne Greeley is Professor Emerita of Theatre at the University of Vermont where she taught theatre history, dramatic literature, Euro-theatre, and “Playing with Femininity.” She has a PhD from the University of Maryland College Park and a master’s degree from American University, Washington, D.C. Her scholarly work includes multiple articles and chapters on women in American theatre, early feminist theatre, the theatre of the radical 1960s, and the teaching of theatre at the university level.

Chapter 2: A Song in White and Black: May Irwin and Angelina Weld Grimké

Chapter 8: "Feminism is for Everybody": Caridad Svich and Sarah Ruhl

Chapter 9: Going Global: Lynn Nottage and a Rainbow of Women