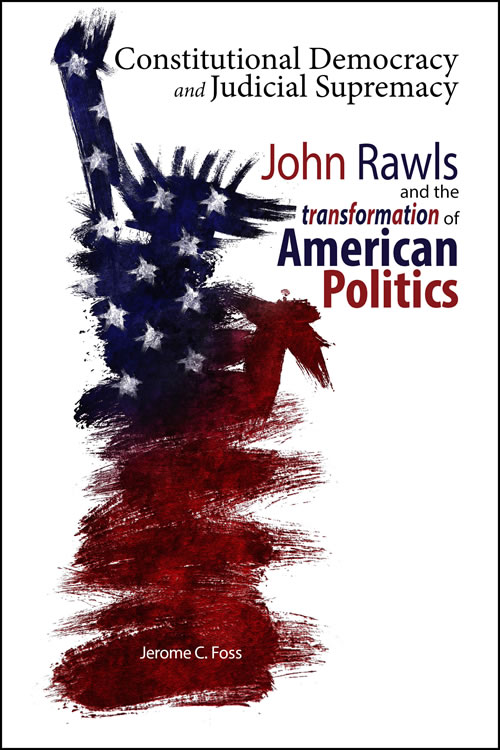 "The best books on politics offer us fresh insight into the way things are and powerful arguments about how things ought to be. Jerome Foss's superb book accomplishes both of these ends, rescuing John Rawls's work from the dusty corners of overly abstract theorizing by emphasizing Rawls's dedication to a very practical reinvention of the American political experiment." —Micah J. Watson, William Spoelhof Teacher-Scholar Chair in Political Science, Calvin College

At the time of the American Founding, political science was primarily concerned with the study of institutions and institutional design. Political scientists wanted to understand how institutions operate and what arrangements would result in the best constitutional order capable of approaching the common good. Political philosophy was a partner in this project insofar as it helped clarify the questions related to the common good and human flourishing.

During the course of the twentieth century, political science shifted its focus from institutional matters to the behavior of political players (voters, politicians, judges, lobbyists, etc.). As this shift became more prevalent, political philosophy lost much of its professional luster. Questions of the common good and human fulfilment were relegated to the realm of values that could only be answered by individuals in their private capacities. Citizens became viewed as value-holders and rights-bearers that entered the political arena hoping to achieve whatever they viewed to be in their self-interest. The conception of a common interest was all but lost.

While this newer model of political science yielded useful insights, it rested on a rather bleak conception of humans as rationally self-interested and autonomous animals. The bleakness of this model led some academics to hope for a new theory of government that would raise the old questions of political philosophy without jeopardizing modern methodologies.

John Rawls is often regarded as the theorist who reinvigorated the study of political philosophy among American political scientists. Since his 1971 book A Theory of Justice, Rawls has been considered the preeminent spokesman for Anglo-American political philosophy primarily contributing to the world a defense of a theory he calls justice as fairness, which aims at preserving individual liberty while encouraging greater social cooperation and respect.

Though many find Rawls’s work to be inspiring, others claim that his political philosophy is insufficient compared to the tradition of political inquiry going back to Socrates. Rawls’s theory, they claim, lacks any real insights into human nature or the purpose of political life. The heated tone over his legacy provides evidence that something more concrete than a philosophical exposition is at stake in his essays and books.

In what is both an important contribution to scholarship on Rawls and American political institutions, Jerome C. Foss provides a fresh reading of Rawls’s corpus with an eye to the late theorist’s political intentions, an approach that goes a long way toward explaining the intractable debate over Rawls’s legacy. Foss argues that Rawls is best put into conversation not with Locke, Kant, Hegel, and other seminal thinkers of political philosophy, but with the framers of the American constitution. Rawls’s theory aims not so much at pointing political scientists and other academics toward the search for a common good, but rather seeks to justify political actors, particularly judges, in reorienting American politics to fit a more egalitarian society. No other book gives as systematic an account of how Rawls aims at supplanting the constitutional republicanism of the American founding with a more democratic regime.

Constitutional Democracy and Judicial Supremacy: John Rawls and the Transformation of American Politics is an important volume for all political science and philosophy collections focused on John Rawls, public and constitutional law, American political thought and institutions, and judicial politics.

"Jerome C. Foss approaches Rawls with the utmost respect and seriousness, and in so doing he simultaneously makes a case for Rawls’s importance beyond the academy and offers a sober critique of Rawls’s impact on American public life. Foss has closely studied all of Rawls’s extant writings, and he convincingly argues—contrary to most perceptions of Rawls—that he “cared far less about influencing the way academics talk about liberalism (though he of course did care about this) than he did about shaping the practice of constitutional government in nations like America” (1). ... Foss’s book is an important contribution to our understanding of Rawls, and even more important in the alarm it sounds regarding Rawls’s strategic ambitions in political life, which have been largely realized." —Catholic Social Science Review

"The best books on politics offer us fresh insight into the way things are and powerful arguments about how things ought to be. Jerome Foss's superb book accomplishes both of these ends, rescuing John Rawls's work from the dusty corners of overly abstract theorizing by emphasizing Rawls's dedication to a very practical reinvention of the American political experiment. This approach has the virtue not only of according with Rawls’s mature interpretation of his work, but also of setting up a lively contrast between the constitutional republicanism of the framers and Rawls’s constitutional democracy. This book is a trustworthy guide to the American constitutional tradition as well as Rawls’s innovative alternative, offering a respectful treatment of the latter while providing an engaging and persuasive defense of the former." —Micah J. Watson, William Spoelhof Teacher-Scholar Chair in Political Science, Calvin College

"Foss’s careful study of the transformative intention of Rawls’s political theory brings extraordinary insights to our academic debates, and to the real causes of our polarized, dysfunctional politics. The analysis of Rawls’s pragmatism reveals its breathtaking goal to elevate progressive-liberal judges as epitomes of public reason, seeking to construct a rationalist, egalitarian-minded democracy to replace the framers’ complex republicanism. Rawls has partially succeeded; we increasingly are ruled by living judicialism rather than the rule of law, under novel power wielded by federal courts, law professors, and lawyers. Foss gives Rawls a fair hearing, but insists we confront the arbitrary and utopian bases of this radical project, and the costs of elevating equality and constructed theory at the expense of liberty, self-government, and natural rights. Those who care about the fate of constitutional self-government, and whether utopian theories produce sustainable polities or political-social disorder, must confront this book." —Paul Carrese, Professor of Political Science, U.S. Air Force Academy

Jerome C. Foss is an assistant professor of politics at the Alex G. McKenna School of Business, Economics, and Government and fellow at the Center for Political and Economic Thought at Saint Vincent College. He holds a PhD and MA from Baylor University and a BA from the University of Dallas. A contributor to John Rawls and Christian Social Engagement, Dr. Foss has published in several journals such as Expositions, Perspectives on Political Science, and Anamnesis.

Chapter 3. The Rhetoric of the Familiar

Chapter 7. The Cost of Constitutional Democracy