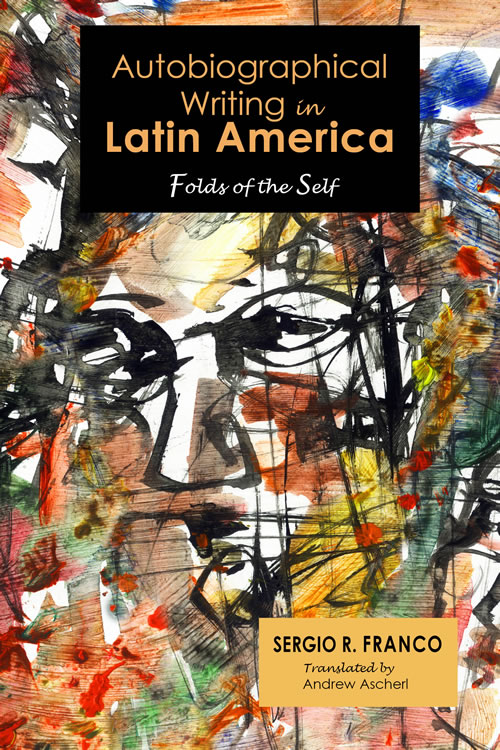 Autobiographical Writing in Latin America: Folds of the Self by Sergio R. Franco

"Superb ... For its variety of authors and types of autobiographical writing, its theoretical rigor and methodological approaches, and its impressive bibliography, this is a most valuable publication. This book should be included as mandatory bibliography to read in all graduate seminars." —Hispania

How can this development be explained? What change, if any, has taken place that can explain this narrative inflection? To what drives or cultural logics does it respond? Responding to these questions can be difficult since the relations between society and artistic production are far from mechanical; there are diverse cultural mediations at stake. Even so, in what follows I will attempt to set forth some considerations that might help to clarify the situation.

Autobiographical Writing in Latin America: Folds of the Self is intended to fill a void. With the exception of this book’s antecedent, At Face Value: Autobiographical Writing in Spanish America (1991), by Sylvia Molloy, there are no similar publications. Molloy’s foundational text studies a distinct period (the nineteenth and early twentieth centuries), as well as a different set of authors than the five analyzed in this book. This study examines the diversity of narrative strategies utilized by these authors to design their “written life,” not only with respect to the future (that is, to history), but rather in terms of their own present, deliberately inserting themselves into their societies. In conclusion, this book’s novelty and innovation lies in its examination of a corpus that has never before been systematically studied.

This book proposes a reflection on contemporary Spanish American autobiographical discourse through four essays. It examines the Spanish American autobiographical discourse in terms of the invalidation or problematization of the great metanarratives of progress and liberation, the debilitation of the political, the emergence of marginal and marginalized subjectivities, an increased ecological consciousness, the climax of a social trend towards the visual and the spatial, as well as the vindication of intimism and the value of sensitivity and everyday socialities.

The first chapter argues that there is an exponential increasing of Latin American autobiographies and memories from the last decade of the twentieth century to these days. It also intends to provide an explanation for this cultural phenomenon and for the welcoming reception among the Latin American audiences as well. The second chater examines how autobiographies and memories use photography as a semiotic document, as a supplement to the writing, and as a poetic paradigm for the autobiographical writing process itself. The third chapter provides a complete examination of the “nuevos escritores mexicanos presentados por sí mismos” series. This was an original project that consisted in publishing short autobiographies (40 pages length) by young and promising Mexican authors. The project embodies the transformations and contradictions that the Mexican literary field was going through the mid-sixties of the last century, the contested area of symbolic capital, and the Nation-State yearning for recognition as well. The fourth chapter focuses on La tentación del fracas, the quintessential literary journal in a context, Latin America, where journals have been uncommon. Based mostly in Paris, where he worked as a cultural attaché at the Peruvian Embassy, Julio Ramón Ribeyro wrote over a span of four decades. The text provides an insightful narrative of a very representative writer’s life during the emergence of Latin American’s narrative international recognition.

The primary audience for this book are academics specializing in the canonical authors studied (José Agustín, Reinaldo Arenas, José Donoso, Salvador Elizondo, Gabriel García Márquez, Carlos Monsiváis, Mario Vargas Llosa, just to name the more famous ones). Specialists in autobiographies and memoirs, as well as historians, sociologists and cultural critics studying Spanish America, will also find this book to be a valuable resource.

"A superb collection of essays on the topic of autobiography ... For its variety of authors and types of autobiographical writing, its theoretical rigor and methodological approaches, and its impressive bibliography, this is a most valuable publication. This book should be included as mandatory bibliography to read in all graduate seminars." —Hispania

"Meticulous yet provocative; original yet firmly and scrupulously grounded in a wide and impressive array of carefully selected bibliographical sources; challenging on each and every page; illuminating both about autobiographical writing in Latin America and about the complexities and processes of self-writing in general: Sergio R. Franco’s new book is all of this and more. Its four studies can each stand alone yet progressively interlock, in a fascinating dialogue with one another, as the work unfurls. I have no doubt that any reader who folds him/herself carefully and attentively into this book will learn as much—both about autobiographical writing and about one’s self—as I did." —Gerald Martin, Professor Emeritus of Modern Languages, University of Pittsburgh; and author of Gabriel García Márquez: A Life and The Cambridge Introduction to Gabriel García Márquez

“Sergio R. Franco’s book advances with brilliance his project on Spanish American narratives of the self exploring the major manifestations of the genre. Latin American autobiographies and memoirs are thriving at the end of the twentieth century, nurtured by contemporary individualism, narcissism, photography, ekphrastic narrative, and procedural analogies. Exhaustiveness and a shrewd theoretical pluralism characterize the volume. Expansive and incisive, this book can and should reach general theoretical attention.” — Raúl Bueno, Professor of Spanish and Portuguese, Dartmouth College

Chapter 1: The Emergence of Autobiographical Discourse in Spanish America