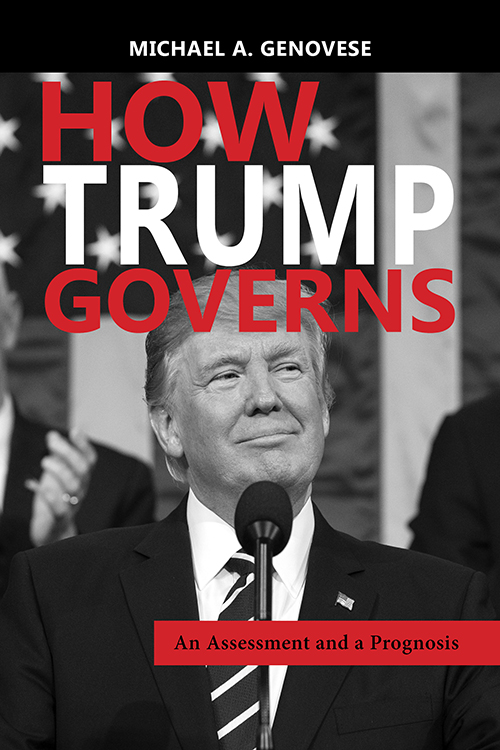 How Trump Governs: An Assessment and a Prognosis by Michael A. Genovese

“How Trump Governs provides keen insights into the president’s character, his campaign for the presidency, and the beginning of his administration. The book is characteristic of Genovese’s careful scholarship and engaging writing. This is an excellent analysis of the early Trump administration, and I recommend it highly.” —James Pfiffner, University Professor, Schar School of Policy and Government, George Mason University

What do the early days of the Trump presidency tell us about the president’s style? Foregrounding this study with a background of how the president’s unorthodox style led him to win the election, Michael A. Genovese looks at the transition period and the usual 100-day standard on which presidents are judged. Genovese presents five tests to see how things have measured up, from Trump’s campaign management to putting together Team Trump to the vision presented in his inaugural address and the first hundred days of the Trump presidency. In addition to looking at President Trump’s leadership style and comparing it with previous presidents, the book examines the campaign promises made and whether they have been or will be fulfilled and why. Not only encapsulating this critical period, this book also looks down the road to see what potential opportunities and challenges President Trump will face and how he might address these.

“How Trump Governs provides keen insights into the president’s character, his campaign for the presidency, and the beginning of his administration. The book is characteristic of Genovese’s careful scholarship and engaging writing. This is an excellent analysis of the early Trump administration, and I recommend it highly.” —James Pfiffner, University Professor, Schar School of Policy and Government, George Mason University

“Genovese builds a case study that readers should regard as a cautionary tale of modern democratic politics. Firmly rooted in historical scholarship and theory, he deftly moves past the reality-television theatrics to document and analyze key administrative developments, discerning the qualities and character of the new ‘disruptor in chief’ who is saddled to a‘rocking-horse’ democracy. This book is a touchstone of presidency scholarship.” —Renee Van Vechten, Associate Professor, Department of Political Science, University of Redlands

"In How Trump Governs, Michael Genovese takes us along for the wild and dangerous ride of Donald Trump’s path to the White House and the early days of his presidency. Genovese offers thoroughly detailed discussion and analysis of the election, transition, and first months in office, explaining how Trump’s character and management style were made clear during the campaign and have, not surprisingly, carried over into his presidency. Genovese explains the unique dangers Trump presents, though this is not a partisan account but rather a thoughtful effort to understand what gave rise to Trump and where things could go from here, including the questions of whether Trump can effectively govern and indeed whether Trump’s presidency can survive the Russia story that seems to grow larger day by day." —Chris Edelson, Director, Politics, Policy, and Law Scholars Program (PPL), American University; and Fellow, Center for Congressional and Presidential Studies

“Very rarely do you find a book which gives you all you need to know about a subject. This is such a book. You get the Trump, the whole Trump and nothing but the Trump. Another handcrafted Rolls Royce on the presidency from Michael A. Genovese” —Honorable Graham Allen, 29-year Member of Parliament, United Kingdom

Chapter 1: Introduction: On Hiring the Most Powerful Leader in the World

Chapter 8: The First Hundred Days: A Reboot or Limping to the Finish Line: Test 5 Continued

Chapter 9: Conclusion: The Way Ahead