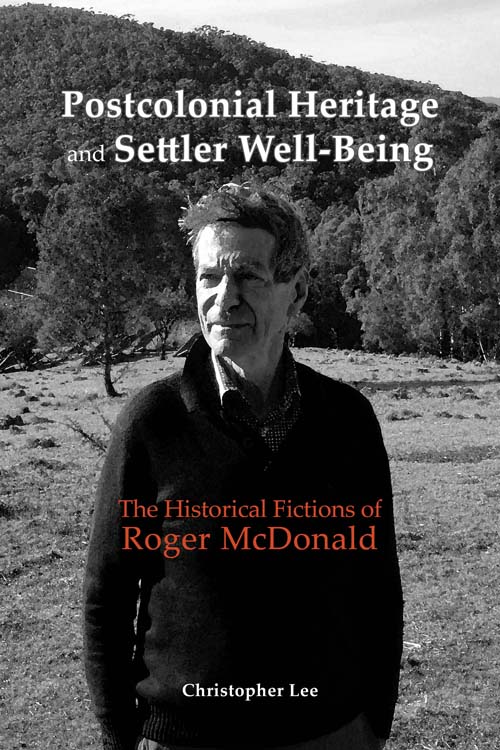 "Lee’s appraisal of McDonald’s take on the challenges faced by Australians—particularly Australian men—is intelligent, illuminating, and ‘appreciative’ without being overly respectful. ... He [McDonald] deserves the recognition afforded by being included in the ‘Australian Literature Series’ ... Under the general editorship of Susan Lever, the series has produced several studies [and] provides a valuable collective survey of the field, in the broader context of international literary developments." —Australian Book Review

This book is part of the Cambria Australian Literature Series, headed by Dr. Susan Lever.

The Australian writer Roger McDonald is the author of ten novels, two novelisations from and for film scripts, two television scripts, one semi-fictionalised memoir, a collection of essays, and two volumes of poetry. His publication record spans half a century from the late 1960s up until the late teens with his tenth novel, A Sea Chase, published in 2017. His books have achieved a significant record in the Australian list of literary awards and he has gone close to breaking into the major international prizes that distinguish the transnational careers of other contemporary Australian writers such as Thomas Keneally, Peter Carey, David Malouf, and, more recently, Kate Grenville. McDonald’s work has been published in London and New York as well as in the key metropolitan markets of his native Australia, and it has been translated into Spanish, German, and Swedish. 1915, his first novel, was adapted into an Australian Broadcasting Commission television series, which was shown on Australian screens in the early 1980s and distributed internationally.

McDonald writes about ordinary characters whose lives have often been overtaken by historical forces they do not understand and cannot control. These men and women are commonly defined by whom they know and what they do rather than through the display of extraordinary qualities of mind, sensibility, or virtue. McDonald often situates his characters’ within foundational Australian historical periods such as the convict period, frontier settlement, the development of the pastoral industry, the Great War, the Golden Age of Aviation, and the Second World War and its aftermath. This later post-war period saw the transformation of Anglo-Celtic Australia by waves of initially southern and eastern European migration, followed by Asian and indeed wider international migration. The emerging multicultural character of the country coincided with the decline of rural Australia and the pastoral industry as the preferred locations for representative Australian types and values. These events or periods are well entrenched within the public memory of a White Australia and that enables McDonald to explore his characters’ search for purpose and fulfillment within the mythological registers of his nation’s postcolonial history.

This study focuses on the books (five novels and the fictionalised memoir) in which McDonald has decided to situate his characters’ search for purpose and well-being within the mythological registers of colonial history. It explores McDonald’s investments in story and his developments in idiom and literary form, as endeavors to engage a wider public in the problem of postcolonial settlement. The common narrative problem is the elusiveness of a condition of Being that is well settled in the web of social, cultural, and environmental connections that are necessary for dwelling. McDonald pursues the possibilities for a wider more satisfying sense of human connection but his representations of the common man under the conditions of postcolonial modernity never allow that to come easily.

"Reading Christopher Lee’s fine study prompted a re-reading of McDonald’s earlier fiction. What a pleasure to rediscover such a cast of quixotic, extreme characters who inhabit those pages. ... Lee’s expansive and insightful survey is underpinned by an analysis of what he sees as ‘the common narrative problem’ in McDonald’s work: ‘the elusiveness of a condition of settled well-being in a society that struggles to maintain social, cultural and environmental connection.’ At the root of the problem is the questionable assertion of sovereignty by the ‘Settler Invader’ society.... Postcolonial Heritage and Settler Well-Being is thoughtful, well researched, insightful, rewarding. ... Overall, this book, part of the Cambria Australian Literature Series, under the general editorship of Susan Lever, is an excellent contribution to the field." —JASAL: Journal of the Association for the Study of Australian Literature

"Lee’s appraisal of McDonald’s take on the challenges faced by Australians—particularly Australian men—is intelligent, illuminating, and ‘appreciative’ without being overly respectful. ... He [McDonald] deserves the recognition afforded by being included in the ‘Australian Literature Series’ of critical monographs brought out by the US academic publisher Cambria Press. Under the general editorship of Susan Lever, the series has produced several studies of the work, career, and reception of Australian writers as various as Thea Astley and Christos Tsiolkas. Aimed at scholars and students engaged in the study of Australian writing (assuming that they still exist), the series provides a valuable collective survey of the field, in the broader context of international literary developments." —Australian Book Review

“Beautifully written, Lee’s book carves out critical space for Roger McDonald in the contemporary canon of historical fiction in Australia and internationally. Particularly impressive is Lee's ability to combine insightful close readings with attention to readers, imagined and real, and to the individuals and institutions that shape the literary work’s movement through the world.” —Katherine Bode, Australian National University, author of A World of Fiction: Digital Collections and the Future of Literary History

“Roger McDonald started out as a poet and became one of Australia’s best-known novelists. In this perceptive, vigorously argued study, Chris Lee shows how McDonald’s remarkable literary career, and in particular his determination to re-understand history, epitomizes a crucial shift of the Australian literary mainstream in the direction of moral reckoning and social justice.” —Nicholas Birns, New York University, author of Contemporary Australian Literature: A World Not Yet Dead

Christopher Lee is a Professor of English in the School of Humanities, Languages and Social Science and a member of the Centre for Social and Cultural Research at Griffith University. He has a Diploma of Applied Science from QUT, an honours degree in literary studies, and a PhD in cultural history from the University of Queensland. Chris has published widely on postcolonial culture and has developed a special interest in the social life of literature. He is the author of City Bushman: Henry Lawson and the Australian Imagination (CUB 2004), editor of Turning the Century: Writing of the 1890s (UQP 1999), and co-editor of Trauma and Public Memory (Palgrave 2015), The Frank Hurley Diaries 1912-1942 (Anthem 2012), Frank Hardy and the Literature of Commitment (VP 2003), Authority and Influence: Australian Literary Criticism 1950-2000 (UQP 2001) and Australian Literature and the Public Sphere (ASAL 1998). Chris is the reviews editor for Australian Literary Studies and a former President of the Association for the Study of Australian Literature.

Chapter 4 Sacrificial Animals and the Limits of the Festival: Shearer’s Motel

Chapter 6 Melodrama and the Dispossessions of History: The Ballad of Desmond Kale