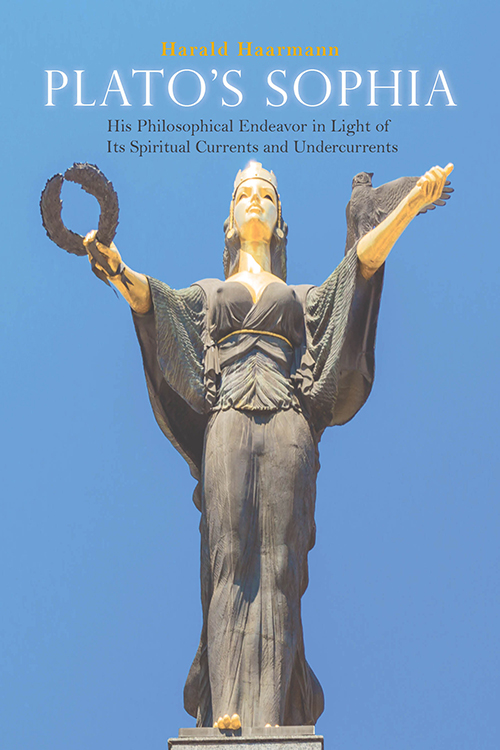 Plato’s Sophia: His Philosophical Endeavor in Light of Its Spiritual Currents and Undercurrents by Harald Haarmann

When we maintain the modern separation of the philosophical from the spiritual and neglect the spiritual currents, our comprehension of Plato's intentions as manifested in his philosophical discourse remains greatly obscured. This study aims at achieving a balance.

There is no other philosopher in antiquity whose work is as comprehensive as Plato’s. However, Plato’s writings have often been misinterpreted, and one reason is that during the course of the eighteenth century, philosophy detached itself from the spiritual sphere, as a consequence of the doctrine of the Enlightenment whose representatives established the cult of reason and discarded spirituality. There are manifold spiritual currents and undercurrents in Plato’s philosophy. Since Plato’s philosophy is oriented to the wholeness of human life, the symbiotic interaction of the philosophical and the spiritual, so obvious in his works, is to be expected. What is surprising is that this symbiosis seems to have been overlooked or intentionally avoided in the mainstream history of philosophy.

When we maintain this modern separation of the philosophical from the spiritual and neglect the spiritual currents, our comprehension of Plato's intentions as manifested in his philosophical discourse remains greatly obscured. This study aims at achieving a balance. In Plato’s “love for wisdom” (philo-sophia), we may discern the soundings of an intellectual heritage that dates to pre-Greek times, that is to the era of Old Europe (the Danube civilization, respectively), where the wholeness of life was practised for more than 3000 years. In light of the strands of this heritage that left their mark in Plato’s work, it is not surprising to learn that, in Indo-European languages, no cognate expression corresponding to the Greek stem soph- can be found. As modern insights from historical linguistics tell us, the isolation of this expression (Sophia) in Greek and its sound structure point to a pre-Greek origin of the term. In other words, the early Greeks embraced an older tradition of reasoning which they considered useful.

Plato’s Sophia will be of vital interest for philosophers, cultural scientists, and students of Greek antiquity, as well as for those who take interest in the world of Old Europe and its afterglow.

Harald Haarmann, PhD, is a German linguist and cultural scientist. He has taught and conducted research at a number of German and Japanese universities. Since 2003 he has been vice president of the Institute of Archaeomythology and director of its European Branch. Dr. Haarmann is the author of more than fifty books in German, English, Spanish, Hungarian, Japanese, Chinese, Korean, and other languages, among them three world histories (of writing, languages, and numbers). His fields of study are cultural history, ancient civilizations, archaeomythology, philosophy, history of religion, writing history, language evolution, and research on identity. For his work, he received the Prix logos awarded by the Association européenne des linguistes et des professeurs de langues (Paris) and the Premio Jean Monnet for essay writing.

Chapter 2: The Spiritual Condition of the Philosopher’s Mind

Chapter 3: The Place of Spirituality in Plato’s Categorization of Knowledge

Chapter 7: The Engagement with Mystery Cults

Epilogue: The Spiritual Infusion of Plato’s Approach and Its Accommodation for Modern Philosophy