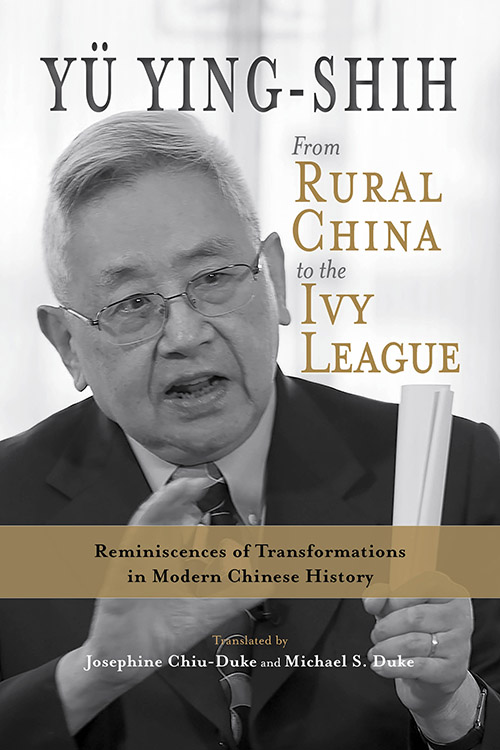 From Rural China to the Ivy League: Reminiscences of Transformations in Modern Chinese History by Yü Ying-shih

"This book is an essential record of the history of our times, bearing witness to the cultural, political, and social transformations of what Professor Yü Ying-shih notes as the period of the most violent turmoil and social upheaval in modern Chinese history." —Professor Chin-shing Huang, Academia Sinica

A leading authority in the field of Chinese Studies, Professor Yü Ying-shih received the John W. Kluge Prize for Achievement in the Study of Humanity in 2006 and the inaugural Tang Prize in Sinology in 2014. These awards represent a recognition of his contributions over six decades to the fields of Chinese history, thought, politics, and culture during which time he published over thirty books, forty-one monographs, and hundreds of articles. The awards also serve to highlight his efforts in redefining Chinese intellectual and cultural traditions, imbuing them with new life. These awards honor the way in which Professor Yü has put his intellectual convictions into practice; for example, his criticism of the violent suppression of the Tiananmen democracy movement of 1989 and his decades-long commentaries on Radio Free Asia. Over the years, his works have had great influence throughout the Chinese-language world where he has been hailed as a paradigm of Chinese humanism.

Professor Yü’s book, originally published in Chinese, covers the period from his childhood in rural Anhui Province China to his professorship at Harvard University, and it has been read extensively in Chinese, both in serial form in the Mingbao Monthly and in book form. The book sold more than 10,000 copies in the first month after its publication by Yunchen Publishing Company in Taipei, Taiwan, in late 2018. The book was awarded the twelfth Hong Kong Book Prize in June 2019.

This book, expertly translated by Professors Michael S. Duke and Josephine Chiu-Duke (University of British Columbia), is much more than the memoir of the scholar who has been hailed as the most important living Chinese historian of our times—it is also an invaluable record of a history of our times, witnessing the cultural, political, and social transformations of what Professor Yü notes as the period of the most violent turmoil and social upheaval in modern Chinese history. This complex period is now made accessible to English-language readers, who will also benefit from the helpful notes by the translators. The book also includes rare photos from Professor Yü's personal collection.

“An immense contribution to scholarship, this book is much more than the memoir of someone considered by many to be the most important Chinese historian of our times. In addition to tracing Professor Yü’s intellectual pursuits and providing a window into his lifelong effort of understanding, revitalizing, and redefining the Chinese cultural and intellectual tradition, this book is an essential record of the history of our times, bearing witness to the cultural, political, and social transformations of what Professor Yü notes as the period of the most violent turmoil and social upheaval in modern Chinese history.” —Professor Chin-shing Huang, Academia Sinica

"With this commendable contribution to the field, English-language readers now have access to the mature reflections of Professor Yü Ying-shih, the leading Chinese historian and humanities scholar, who was the first Asian to be awarded the John W. Kluge Prize for the Study of Humanity by the Library of Congress and the first humanities scholar ever chosen for the Tang Prize by Academia Sinica. Yü’s reflections tell us much about the history of twentieth-century China as well as the lives of ordinary people, and they illuminate the views and experiences of many major Chinese scholars of the last hundred years. The organization is brilliant. For example, after a chapter about his background, Yü discusses perspectives on the May Fourth Movement and how it’s been viewed in relation to the European Renaissance and the Enlightenment; in the process, he shows how such projections of equivalence were flawed and provides his own views. The book traces and analyzes different generations of Chinese scholars who came to study at Harvard during various periods of time over the twentieth century. Yü shows how myriad personal and international factors interacted for these scholars, telling us what determined who was selected as well as when, or if, they returned to China. Readers will learn how Chinese scholars dealt with cultural and practical issues as well as national and international matters. This book provides rare insights on Chinese scholars in America and abroad, which will be valuable for both scholars and general readers." —Professor Hoyt Tillman, Yuelu Academy (Hunan University) and Arizona State University

Yü Ying-shih (1930–2021) was Professor Emeritus of History at Princeton University and arguably the premiere historian of Chinese social and intellectual history of the classical period. Awarded the John W. Kluge Prize for achievement in the Study of Humanity and the inaugural Tang Prize International Award in Sinology, he published more than thirty books and five hundred articles and essays on Chinese history, thought, politics, and culture. His most recent works include Lun tian ren zhi ji (Between heaven and the human: An exploration of the origin of ancient chinese thought; 2014), Zhu Xi de lishi shijie (The historical world of Zhu Xi: A study of the political culture of Song intellectuals; 2003, 2011), Shi yu Zhongguo wenhua (Chinese intellectuals and Chinese culture; 2003, 2010, and 2013), and thirty-three of his English-language essays are published in Chinese History and Culture Volume 1: Sixth Century B.C.E. to Seventeenth Century C.E. and Volume 2: Seventeenth Through Twentieth Century (Columbia University Press, 2016), with the editorial assistance of Josephine Chiu-Duke and Michael S. Duke.

Josephine Chiu-Duke is Professor of Chinese Intellectual History in the Asian Studies Department at the University of British Columbia.

Michael S. Duke is Professor Emeritus of Chinese and Comparative Literature from the Asian Studies Department at the University of British Columbia.

Preface: From “Interviews” to “Memoir”

—Part One: Nine Years in Qianshan

—Part Three: the Nature of the May Fourth Movement

Chapter 2. Communism and the Anti-Japanese War of Resistance

—Part One: How I Learned to Understand Communism

—Part Two: Background of the Anti-Japanese War of Resistance

—Part One: Transferring to the New Asia College

—Tang Junyi and the Rise of New Confucianism

—Part Three: Political and Cultural Development of a Liberal Intellectual

—The Youlian Publishing Group and its Founders

—The Scope and Influence of the Youlian Publishing Group

—The Unique Impact of the Motherland Weekly

—Part One: On First Visiting Harvard

—Xing Muhuan: Like An Old Friend at First Meeting

—Looking Back on a Year of “Visiting Scholar” Work

—Part Two: Studying for the Doctorate

—Following Gilmore and Reading the Renaissance

—Gao Yougong Studies to “Improve Himself”

—The Distinctive Features of the New Period

—Harvard Only Part of a General Trend